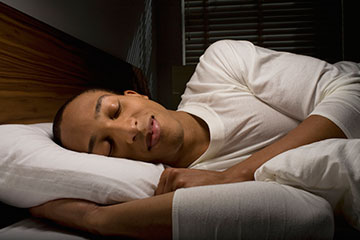 Basic sleep hygiene like keeping the same sleep schedule week-round and not watching TV in bed might be enough to cure or reduce exploding head syndrome.
Stuart O'Sullivan/Getty Images

Although the name invokes some pretty grisly images, exploding head syndrome is quite benign and generally does not require treatment. In fact, one of the best courses of treatment has been to have doctors assure patients that the condition is not a symptom of something more serious. Upon hearing these assurances, some patients have gone into remission [source: Sharpless].

Exploding head syndrome can easily be confused with other conditions, such as other sleep disorders, different types of headaches, side effects from medications or substance abuse, or mental health disorders. It is not uncommon for PTSD and nightmare disorder patients to hear loud noises that startle them awake from sleep. Exploding head, however, can be distinguished from these other conditions by a notable lack of context around the noise. Patients with PTSD, for example, may hear noises while having a flashback, for instance. Exploding head syndrome is just a noise, albeit a loud one.

Once confirmed that a patient is suffering from exploding head syndrome, a doctor may want to conduct an overnight sleep study (polysomnogram) to see if he or she has any other sleep disorders, since 10 percent of patients with another sleeping disorder will also have exploding head [source: Tanchanco]. The doctor will chart brain waves, heart beat and breathing during sleep, and also record the movement of arms and legs.

But if no other treatable sleep disorder is found, physicians will typically suggest improved sleep hygiene for the patient. This includes practices like keeping a regular sleep schedule; making sure the bedroom is quiet and dark; cutting out alcohol and coffee after 5 p.m.; restricting naps; not reading or watching television in bed and embarking on a morning exercise routine. On the medication side, tricyclic antidepressants (like clomipramine) and calcium channel blockers have been known to help some people [source: Mitchell]. And then there's the advice that can help all of us – not just exploding head patients: Reduce stress and learn how to relax!

When I first heard of exploding head syndrome, I was pretty sure this would be a short article: Your head explodes and you die. Thankfully for all of us, that isn't something that actually happens. I'll take loud scary noises during sleep over blood and brain explosions any day!