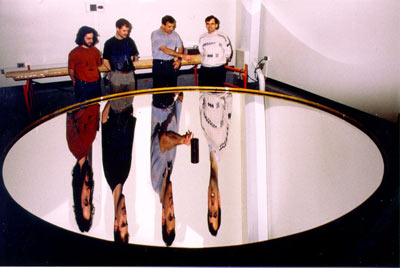 Since it was repaired in 1993, NASA's Hubble Space Telescope has amazed scientists and citizens alike with its views of the universe, including glimpses of the farthest known galaxies. The mirror in Hubble, however, is relatively small at 94.5 inches (almost 8 feet) across, a limitation that has encouraged NASA to think bigger. The James Webb Space Telescope, slated for a 2013 launch, will boast a 20-foot mirror capable of providing seven times the light-collecting area of Hubble.

But NASA is also considering a more intriguing solution -- a special type of reflecting telescope that uses a liquid, not glass, as the primary mirror. Known as a liquid mirror telescope (LMT), it wouldn't view space from Earth's orbit, as Hubble does. Instead, it would peer into the universe from the moon's surface. The telescope would be anywhere from 66 feet to 328 feet wide, making it the largest telescope known to man. It would collect 1,736 times more light than Hubble and penetrate the depths of the universe to see objects nearly as old as the Big Bang.

This article will explain how a liquid mirror telescope works. It will look at the structure and function of an LMT, but it will do so in light of a moon-based deployment. How in the world does one build a telescope on the moon? How difficult is it going to be to build an LMT on the moon? And m­ost importantly, what opportunities can a lunar telescope provide?

In an airplane hangar in Columbus, Ohio, some 80 tons of steel, electronics and cryogenic equipment are about to come together -- and deposit one ounce of aluminum in a whisper-thin coating on a giant telescope mirror.

Watch this video from NASA Brain Bites to learn how you can see the International Space Station from Earth.­