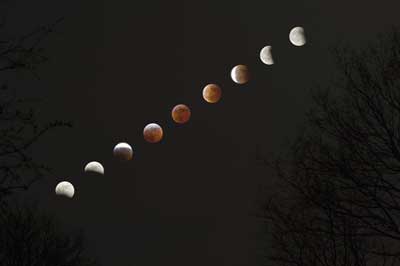 Digital composites like this one are becoming popular ways to capture the progression of phenomena like lunar eclipses. See more moon pictures.
Derek Croucher/Photographer's Choice/Getty Images

The moon has been Earth's trusty sidekick for billions of years. And as it endlessly cruises around our planet, once in a while this scrappy satellite precisely aligns within Earth's shadow, taking on an eerie, reddish glow. And what's this phenomenon known as? A lunar eclipse, of course.

Interest in astronomy stretches back to the Stone Age. Ancient civilizations in Greece, China and Babylonia were fascinated by the celestial events unfolding across the skies above them. Records of eclipses exist in their writings, giving us glimpses of how previous cultures described and interpreted these astronomical happenings. For example, Yuanshi (History of the Yuan Dynasty) details the timing of a total lunar eclipse on May 19, 1277 in traditional double-hours and marks [source: Encyclopaedia Brittanica]. Chinese astronomers used their findings to eventually help predict eclipses with startling precision. In addition, records like the ones detailing lunar eclipses can help pinpoint when, where and how major historical events occurred.

Dating all the way back to 500 B.C.E., ancient peoples correctly understood the basics of why the moon went through different phases and why eclipses occurred. They often recorded when solar and lunar eclipses took place — especially when they corresponded to major happenings back on Earth. Typically, they regarded solar eclipses and lunar eclipses as unlucky omens, a frightening sight when either occurred.

In some cases, eclipses impacted the course of history. For example, a lunar eclipse that occurred during the Peloponnesian War enabled the Syracusan army to defeat the Athenians. The eclipse, as both omen and event, greatly frightened and unnerved the Athenian soldiers and sailors so they postponed their intended retreat from Syracuse [source: Encyclopaedia Brittanica]. This delay gave the Syracusan army time to destroy the Athenian forces.

People have been examining and studying eclipses for 3,000 years, so we better carry on the tradition and learn about the phenomenon for ourselves today.

What Is a Lunar Eclipse?

So what is a lunar eclipse? These eclipses are actually remarkably simple considering how interesting and dynamic they can be. Basically, the Earth's shadow blocks most of the sunlight from directly illuminating all — or a portion — of the moon's surface.

Earth generates two cone-shaped shadows: The umbra is the dark, center shadow, and the outer, more diffused one is known as the penumbra. The penumbra encases the umbra. Both these cones are cast out from behind the sunlit side of the planet. Consequently, lunar eclipses only occur during the full moon phase (when the moon and the sun are on opposite sides of Earth). Solar eclipses are possible only during the new moon phase (when the moon plays "monkey in the middle" between the sun and Earth).

It's important to note that lunar eclipses don't occur during every full moon because of two factors. The first has to do with the variations in the orbital planes between the sun, Earth and the moon. The rotational layout of the sun and Earth forms an ecliptic plane between the two celestial bodies. The moon, however, doesn't circle Earth in line with this same plane — instead, its orbit is about 5 degrees off kilter. Any point where the moon happens to cross the ecliptic plane is called a node, and the moon must be near a node for an eclipse to occur.

The occurrence of a lunar eclipse also depends on whether the moon is in the full moon phase when it reaches a node. So the second factor to note is that as the moon orbits Earth, it doesn't complete its full cycle from new moon to new moon as quickly as it returns to the ecliptic plane, creating a disparity between the two occurrences. Three "months" affect the phases of the moon, thus influencing the development of an eclipse. The draconic month lasts 27.2 days and involves the time between the moon's upward passage through a node and back again. The 29.5-day synodic month includes how long it takes the moon to go through all its phases, from new moon to new moon. As Earth travels in its orbit, the moon takes longer to catch up and get back to its original spot in reference to the sun. The anomalistic month, how long it takes the moon's elliptical orbit to bring it from its closest position to Earth (perigee) to its farthest (apogee) and back again, affects the appearance and duration of an eclipse.

These three months work in tandem to create the saros cycle — a pattern discovered by ancient civilizations that can help determine when, where and how a lunar eclipse will appear. Each saros cycle lasts about 6,585 days.

The time the moon spends encased in the umbra is called totality. If you hear someone referring to the length of totality of a lunar eclipse, they're talking about the middle phase of the overall event. Totality doesn't include the time on either side of the umbra when the moon was passing through the penumbral or partial eclipse phases. The length of totality can range from around 20 to 100 minutes.

There are many dynamic interactions going on when the shadowy Earth eclipses her celestial companion. The color and brightness of the moon during a lunar eclipse varies according to this planet's atmospheric conditions.

None of the sun's light can slip past the bulk of Earth to shine in the umbra. However, Earth's atmospheric particles (like volcanic ash, dust and water vapor) refract the light and send it on to illuminate the moon. The refracted, indirect light is on the redder side of the spectrum, which is why the moon often emits between a deep brown and bright orange hue. For more information on how this light trick happens, read How Light Works.

The work of French astronomer André Danjon brings us what's known as the Danjon Scale, a way to classify the lunar luminosity during an eclipse.

The lunar eclipse that began Oct. 27, 2004, was fairly bright due to the relative transparency of Earth's atmosphere.
Roger Ressmeyer/Science Faction/Getty Images

You can view a lunar eclipse from anywhere that night has befallen (at varying times throughout the evening), and it appears somewhat uniformly to people throughout a specific region. The amount of time an eclipse lasts depends on the type of eclipse and what part of the shadow the moon is passing through. The longest lunar eclipses may last a few hours, from start to finish.

Are you ready to pull out a lawn chair and spend the evening watching the majestic movement of the next lunar eclipse? Impressive lunar eclipses don't happen every day (or every night, to be more specific), but with the links that follow, you can find out when the next one will be visible in your area.

Point Me to the Sky

Lunar eclipse photography is a popular pastime. Many enthusiasts will travel to distant locales to be on hand for eclipses that aren't visible in their own hometowns. Methods like multiple or long exposures can be used to take pictures of a lunar eclipse. Telescopes and telephoto lenses can help enlarge the image, and tripods and telescopes are useful because they can steady cameras. For more information about astrophotography, read What is astrophotography?

In 1504, Christopher Columbus played a nasty trick on the native people of Jamaica. He used his knowledge of an impending lunar eclipse — derived from an almanac — to scare them into continuing to provision his stranded crew. Columbus pretended his God was angry at their lack of cooperation and that was the cause of the moon's dramatic "disappearance." As soon as the panicked native people brought food and supplies, God "forgave" them and the moon returned to normal.