What is a Liquid Mirror Telescope? 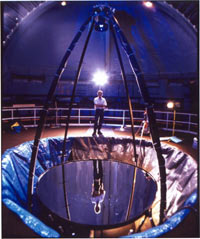 In principle, an LMT is no different from a normal reflecting telescope. Check How Telescopes Work for a thorough explanation of telescopes. Here's a quick recap.

A reflecting telescope uses mirrors to view distant objects. A primary mirror gathers light from the object, while a secondary mirror focuses the image to the eyepiece. In a conventional reflector, the primary mirror is made by painstakingly grinding and polishing glass to its desired shape, usually a parabola. Once the glass is prepared, a process known as aluminizing makes it reflective. Aluminizing involves vaporizing aluminum in a vacuum, causing a film of metal about 100 nanometers thick to be deposited on the glass. Flaws in the mirror production can affect how the telescope performs. This was the issue with Hubble: The curve in its primary mirror was off by just a fraction of a hair's width, which caused light to reflect away from the center of the mirror, leading to blurry images.

A liquid mirror telescope, as its name suggests, uses a liquid, not aluminized glass, as its primary mirror. The liquid, usually mercury, is poured into a rotating dish. The rotation creates two fundamental forces that act on the mercury -- gravity and inertia. Gravity pulls down on the liquid surface, while inertia pulls the liquid sideways at the edge of the dish. As a result, the liquid forms a uniform and perfect parabola, the ideal reflecting surface for a telescope. Best of all, the liquid mirror surface remains smooth and flawless with little or no maintenance. If the liquid is disturbed, gravity and inertia will act on the liquid to return it to its original state.

Ernesto Capocci, an Italian astronomer, was the first person to describe how an LMT might work in 1850. He conceived of the idea after reading about experiments, conducted by Isaac Newton and others, involving spinning liquids. In the early 20th century, the American physicist R.W. Wood actually built what Capocci had described 50 years earlier. Wood's LMT featured a one-centimeter layer of mercury placed in a rotating dish. He was able to observe the moon but noted that the image was distorted. Modern astronomers learned that the image quality of an LMT was greatly improved if a thinner layer of mercury was used, so today's LMTs use a one-millimeter layer of mercury.

The Advantages of Liquid Mirror Telescopes

The biggest advantage of an LMT is its relative low cost. Liquid telescopes cost much less to build than polished aluminum mirrors of similar size. For example, the Large Zenith Telescope carried a price tag of $1 million. A comparable glass mirror telescope would cost 100 times that much to build. And LMTs cost less to maintain, mainly because the liquid mirror doesn’t need to be cleaned, adjusted or aluminized.

Of course, there are some drawbacks. Mercury is extremely toxic, so working with it poses some long-term health risks. Not only that, the dish holding the mercury can only be tilted so far before the liquid spills out. This limits the view of an LMT, which can only look straight up.