What is a Lunar Liquid Mirror Telescope? 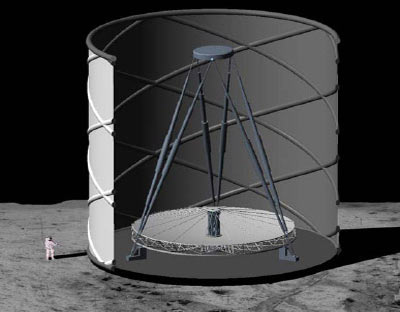 A liquid mirror telescope built on the surface of the moon is a lunar liquid mirror telescope (LLMT). It's really no different from the Large Zenith Telescope described in the last section, except that the liquid chosen must have just the right properties if it is to remain liquid in the moon's harsh climate. Mercury won't work because its freezing point is -101.966° F (-74.43° C). The low temperature on the moon can reach -243° F (-153° C), so mercury would solidify, making it an unacceptable choice for the primary mirror.

­Recently, scientists have discovered a class of liquids that might make an LLMT possible. They are known as ionic fluids, and they have these important properties:

Most importantly, ionic liquids can be coated with materials that give them high reflectivity. One ionic fluid showing promise is 1-ethyl-3-methyli-

midazolium ethylsulphate, commercially known as ECOENG 212. ECOENG 212 can be coated in silver, making it highly reflective. Its reflectivity can be improved even more by depositing a film of chromium first, followed by silver. ECOENG 212 has a freezing point of -144° F (-98° C), however, so it still could solidify in the moon's bitter-cold temperatures. Given that there are millions of ionic liquids, scientists feel confident that they will find another candidate with a better freezing-point profile.

They will also have to find another way to support the primary mirror. The air bearing used in the Large Zenith Telescope won't work on the moon because there's no air to feed the system. One solution would be a superconductor magnetic bearing. Such a bearing is based on the same technology used in maglev vehicles, which use a magnetic field to levitate a vehicle above a guideway. In this case, the magnetic field creates a zero-friction cushion between the spindle and its housing.

Of course, all of these materials will have to be shipped by rocket to the moon and assembled there. Even taking that into consideration, a liquid mirror telescope poses far fewer logistical problems than a conventional reflecting telescope made of glass. The mirror, because it's liquid, will simply be carried in a jug and stored until the telescope infrastructure is ready. Then an astronaut will pour the liquid into the dish to form the primary mirror. The truss system used to support the dish and mirror could be prebuilt and deployed robotically, its framework unfolding like an umbrella being opened. But using a robot to build an LMT on the moon would require that the instrument remain fairly small. As we'll see in the next section, the LMT envisioned by astronomers and NASA engineers is anything but small.­