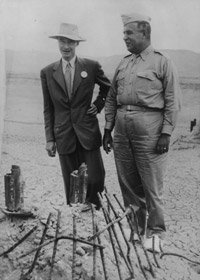 Nuclear physicist Robert Oppenheimer, left, with Major General Leslie Groves, by the remains of the tower from which an atom test bomb was ignited.
Keystone/Getty Images

By March 1942, the Army Corps of Engineers became directly involved with S-1 meetings, and on Sept. 18 Colonel Leslie R. Groves was appointed head of the project, now officially known as the Manhattan Project. With a strong background in engineering -- he oversaw with the construction of the Pentagon -- Groves turned out to be an incredibly skilled administrator and contributed greatly to the bomb's success within an impossibly short time span.

Over the next year Groves would select several sites across the United States that would aid in the bomb's completion, including Oak Ridge, Tenn. (Site X) and Hanford, Wash. (Site W). These locations were massive facilities meant for uranium and plutonium production. When Groves selected Robert Oppenheimer, professor of theoretical physics at Berkeley, to act as director of Project Y, the two chose Los Alamos, New Mexico, as the site that would be the central hub of the Manhattan Project.

Los Alamos, along with the sites in Tennessee and Washington State, were remote locations picked for maximum security, but you wouldn't know it if you saw pictures of them during peak production. The desolate New Mexican mesa in Los Alamos, for instance, was essentially turned into a small city, with laboratories, offices, dining halls and housing for everyone involved in the project. Oppenheimer worked hard on gathering the best scientific minds in the country, and for nearly three years between the fall of 1942 and the bombing of Hiroshima on Aug. 6, 1945, thousands of people worked through the challenges of constructing an atomic weapon.

Simple housing for the workers involved in the Manhattan Project at Los Alamos, N.M.
Keystone/Getty Images

­Security at Los Alamos was extremely tight, as people were hardly allowed to contact family members and friends for their entire stay at Site Y. Guards were tough on clearance issues, and barbed wire surrounding the entire complex. The Manhattan Project was enveloped in so much secrecy, in fact, that some people didn't even know the nature of their work until they heard news of the bomb exploding over Hiroshima.

Two types of nuclear bombs were designed at Los Alamos -- an implosion bomb and a gun-triggered bomb. After major improvements were made on the implosion device, a site was finally chosen to test the first nuclear bomb. Alamogordo, a desert range about 210 miles south of Los Alamos, was nicknamed "Trinity" for the testing of a plutonium bomb design -- Oppenheimer allegedly recalled a John Donne poem that begins "Batter my heart three-person'd God" and felt the comparison fitting. At 5:30 a.m. on July 16, 1945, the bomb was detonated, creating a massive blast and temporarily blinding several of the observing scientists: the Atomic Age had begun.

Less than a month later, the United States used the implosion bomb and the untested gun-triggered bomb in order to coerce the Japanese into surrender. Although the bomb arguably ended the conflict overseas by ending ground combat in Japan, the bomb's existence ushered in a nuclear arms race that would dramatically alter the second half of the 20th century.

If you'd like to learn more about the Manhattan Project and nuclear weapons, follow the links below.­