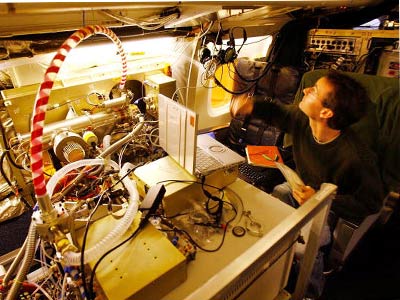 NASA's mass spectrometer sits aboard a DC-8 jet to be used as a flying lab that will study the impact of air pollution on the Arctic area.
David McNew/­Getty Images

­The worlds of analytical chemistry and major league baseball would seem to be a million miles apart. But in the modern era of the sport, atoms and molecules have become almost as important as double plays and home runs. How so? It's chemistry that enables the league to sniff out players guilty of "sports doping" -- taking anabolic steroids to promote muscle growth and gain competitive advantage. In fact, the formula of every notable scandal in recent years -- Mark McGwire, Barry Bonds, Alex Rodriguez -- goes something like this:

When the headlines hit, they focus on the player: When did he start taking the drug? How long did he take it? Did he break any records while on the drug? Should those records be overturned? No one pays much attention to the chemistry, which is often treated as a footnote, if at all.

We're here to­ correct that unfortunate oversight. This article will walk you through the unassuming but handy field of chemistry known as mass spectrometry. It will explore the basic scientific principles at work, as well as some of the advanced techniques that make it possible to analyze everything from solar wind to the exhalations of a patient under general anesthesia to the excretory products of professional athletes.

­Up first, let's lay the proper foundation with a mental exercise and a brief history lesson.

­­The principles behind mass spectrometry are somewhat abstract, so let's start with a concrete mental exercise. Suppose you wanted to weigh a fully loaded­ tractor-trailer. The easiest way would be to drive the rig to a heavy-duty truck scale. Now let's say you wanted to weigh one of the trailer's wheels. A regular bathroom scale could provide that information. Next up, you decide to weigh a lug nut from one of the wheels, which would require nothing more than an ordinary kitchen or lab scale. Finally, imagine you wanted to weigh a single atom scraped from the surface of the lug nut. How would you measure it? Even the most sensitive laboratory balance wouldn't register the weight of something so small.

This was the situation confronting chemists at the beginning of the 20th century. Thanks to John Dalton's atomic theory, they knew that matter was made of atoms and that atoms of one element were the same. But what did an atom look like, and how much did it weigh? In 1897, J.J. Thomson discovered the electron by studying the behavior of cathode rays, the stream of negatively charged particles originating at the cathode, or negative electrode, in a gas-filled vacuum tube. A year later, Willy Wien began working with "positive rays" -- the stream of positively charged particles that emanate from the anode and move toward the cathode. Wien observed that a magnetic field could deflect positive rays. Then, in 1907, Thomson began deflecting positive rays with both electric and magnetic fields. He discovered that he could determine the particles' mass by measuring how far they were deflected.

In 1919, Francis Aston improved on Thomson's methods and apparatus, leading to the first mass spectrometer -- a machine that literally weighs atoms and molecules. Aston used his spectrometer to study hundreds of naturally occurring isotopes. Today, chemists still use the mass spectrometer to measure the molecular weights of elements, isotopes and compounds. But they also use it to identify the chemicals in a sample, determine how much of each chemical is present in a sample and analyze the structure of complex molecules.

Next, we'll take a closer look at what's going on inside a mass spectrometer.

The Search for Meaning

Mass spectrometry is one of the most important techniques of an analytical chemist. Unfortunately, it's one of several related terms that can cause confusion. Let's try to make sense of these terms: 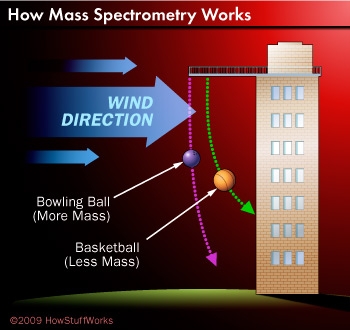 ­To understand the basic principles of mass spectrometry, consider a person standing at the top of a tower­ on a windy day. The person picks up various balls and drops them, one by one, from the tower. As each ball falls, wind deflects it along a curved path. The masses of the balls affect how they fall. A bowling ball, for example, is much heavier than a basketball and is therefore harder to move. As a result, a bowling ball follows a different path than a basketball.

In a mass spectrometer, the same thing is happening, except it's atoms and molecules that are being deflected, and it's electric or magnetic fields causing the deflection. It's also happening in a cabinet that can be as small as a microwave or as large as a chest freezer. The cabinet contains three basic parts: an ionization chamber, a mass analyzer and a detector. Here's how it all works.

To be deflected by electric or magnetic fields, atoms must first be ionized, or turned into charged particles. This is accomplished by knocking away one or more electrons, which results in a particle with a net positive charge. Spectrometrists sometimes bombard a sample with a beam of electrons to ionize the molecules. The incoming electrons act like billiard balls, knocking away electrons in the sample. They also use a technique known as electrospray ionization, which forces a sample through a charged needle to strip away electrons. Either way, this first step of mass spectrometry produces positive ions.

Next, the positive ions must move out of the ionization chamber. The force required to move them comes from an electric field supplied by two metal grids.­ One grid is positively charged and repels the ions; the other is negatively charged and attracts them. Because the repulsion and attraction act in the same direction, the ions move rapidly toward the negatively charged grid, which is perforated with many tiny holes. The ions pass through the holes at varying speeds. Lighter ions travel faster than heavier ones.

­According to the laws of electromagnetism, a moving stream of electrically charged particles will generate a magnetic field. The ions in a mass spectrometer are no exception. They produce a magnetic field of their own, and it is this magnetic field that scientists take advantage of in the most important step of spectrometry. We'll get to that in the next section.

­­­­­­­C­reating and accelerating ions are essentially preparatory steps to the real work of mass spectrometry -- mass analysis. The main job of the mass analyzer is to apply an external magnetic field to the ions exiting the ionization chamber. This external field interacts with the magnetic field generated by the fast-moving particles, causing the path of each particle to bend slightly. How much an ion's path curves depends on two factors: the mass of the ion and its charge. Lighter ions and ions with a greater charge are deflected more than heavier ions and ions with a smaller charge.

The net result is that each ion follows a path dependent on its mass, as shown on the right. Ion stream A has the lightest particles and is deflected the most. Ion stream C has the heaviest particles and is deflected the least. The mass of the particles in ion stream B falls somewhere in between. Notice that only one of the ion streams actually passes through the mass analyzer and reaches the detection unit at the back of the device. The other two streams hit the side of the spectrometer and are neutralized. To analyze all of the ions, chemists simply adjust the intensity of the magnetic field until each stream hits the detector.

A computer is used to analyze data collected at the detector and to display results in a graph known as a mass spectrum. On most graphs, the mass -- measured in atomic mass units (amu) -- is plotted on the x-axis. Relative intensity, which measures how many ions of a given mass are detected, is plotted on the y-axis.

­Up next, we'll return to the major leagues and explore how mass spectrometry is used to expose steroid abuse in home-run sluggers.

­Let's get back to the ­baseball player's urine we discussed in the introduction. In mass spectrometry, the urine would be called a sample. Once upon a time, mass spectrometers were only capable of analyzing samples that existed as gases, but today's models can handle solids and liquids. Spectrometrists, usually analytical chemists, insert the sample directly into the ionization chamber or, if it's a complex mixture, into another device that performs a first-pass separation of the sample's component parts. Chromatography is the most common way to conduct this initial separation and can occur as either gas chromatography (GC) or liquid chromatography (LC). Chromatography separates the sample into a series of components by first dissolving the substance in a gas or a liquid, then forcing it through a secondary material. A component that is soluble in the first phase will move more slowly than a component that is not soluble in the first phase but very soluble in the second phase. As a result, the various components become separated. Each one then enters the mass spectrometer for analysis.

­Urine drug testing is typically conducted by gas chromatography/mass spectrometry (GC/MS). Sometimes, more than one mass spectrometer is used in a technique called tandem mass spectrometry, which basically acts to break apart large ions into smaller ions for more detailed analysis. All of this is required because urine contains a large number of components, including naturally occurring steroids. Using GC/MS or GC/MS/MS detects more chemicals and yields more reliable results.

How do chemists use mass spectrometry to test for illegal steroids? First, they analyze several known steroids to produce their mass spectra for comparison purposes. They can also rely on tables of mass values, if they are available for reference. Next, they analyze normal, uncontaminated urine. Then they test a player's urine, using either GC/MS or GC/MS/MS. Finally they compare the mass spectrum produced from the player's urine with the spectra of normal urine and known steroids. By comparing the peaks on the spectra, which represent ions of various masses, chemists can identify exactly what drugs, if any, are present in the urine. Typical results might look those shown below.

­Notice that the test sample has peaks that line up with the steroid standard. The peaks represent ions containing certain elements. For example, the C2H3 ­ ion will have a different peak than the OH ion. In this way, mass spectra are used as "fingerprints" to identify compounds. Up next, we'll see that those compounds don't have to be in a ball player's urine. They could be in almost any sample imaginable.

­Drug testing is just one application of mass spectrometry. Almost every scientif­ic discipline relies on the analytical technique for pure or applied research. Consider these examples:

­Of course, those applications don't attract as many headlines as a sports star testing positive for steroid use. Such headlines may become even more common as the techniques of mass spectrometry improve. Scientists at Purdue University and Tsinghua University in Beijing have recently developed a faster, more sensitive test for anabolic steroids. The test combines tandem mass spectrometry with an ionization technique known as reactive desorption electrospray ionization. Using these techniques, the scientists can identify seven types of anabolic steroids in a single drop of urine and do it at a rate of one sample per second. Perhaps this will finally put a nail in the coffin of baseball's Steroid Era.