What Is Avogadro’s Number? 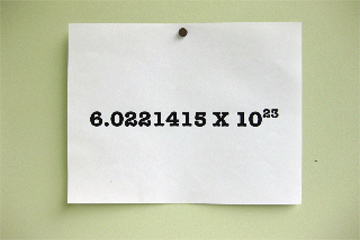 Avogadro's number: At least it's not as hard to remember as pi.
Photo courtesy A. Loudermilk

Just like a dozen is 12 things, a mole is simply Avogadro's number of things. In chemistry, those "things" are atoms or molecules. In theory, you could have a mole of baseballs or anything else, but given that a mole of baseballs would cover the Earth to a height of several hundred miles, you'd be hard-pressed to find good practical use for a mole of anything bigger than a molecule [source: Hill and Kolb]. So if the mole is only used for chemistry, how did Amedeo Avogadro (full name: Lorenzo Romano Amedeo Carlo Avogadro) and chemistry cross paths?

Born in Italy in 1776, Avogadro grew up during an important period in the development of chemistry. Chemists like John Dalton and Joseph Louis Gay-Lussac were beginning to understand the basic properties of atoms and molecules, and they hotly debated how these infinitesimally small particles behaved. Gay-Lussac's law of combining volumes particularly interested Avogadro. The law stated that when two volumes of gases react with one another to create a third gas, the ratio between the volume of the reactants and the volume of the product is always made of simple whole numbers. Here's an example: Two volumes of hydrogen gas combine with one volume of oxygen gas to form two volumes of water vapor (at least when temperatures are high enough) with nothing left over, or:

Tinkering around with the implications of this law, Avogadro deduced that in order for this to be true, equal volumes of any two gases at the same temperature and pressure must hold an equal number of particles (Avogadro's law). And the only way to explain that this law could be true for any example, including the one we just mentioned, is if there was a difference between atoms and molecules and that some elements, like oxygen, actually exist as molecules (in oxygen’s case, O2 rather than simply O) Granted, Avogadro didn't have words like "molecule" to describe his theory, and his ideas met resistance from John Dalton, among others. It would take another chemist by the name of Stanislao Cannizzaro to bring Avogadro's ideas the attention they deserved. By the time those ideas gained traction, Avogadro had already passed away.

How on Earth did chemists settle on such a seemingly arbitrary figure for Avogadro's number? To understand how it was derived, we have to first tackle the concept of the atomic mass unit (amu). The atomic mass unit is defined as 1/12 of the mass of one atom of carbon-12 (the most common isotope of carbon). Here's why that's neat: Carbon-12 has six protons, six electrons and six neutrons, and because electrons have very little mass, 1/12 of the mass of one carbon-12 atom is very close to the mass of a single proton or a single neutron. The atomic weights of elements (those numbers you see below the elements on the periodic table) are expressed in terms of atomic mass units as well. For instance, hydrogen has, on average, an atomic weight of 1.00794 amu.

Unfortunately, chemists don’t have a scale that can measure atomic mass units, and they certainly don’t have the ability to measure a single atom or molecule at a time to carry out a reaction. Since different atoms weigh different amounts, chemists had to find a way to bridge the gap between the invisible world of atoms and molecules and the practical world of chemistry laboratories filled with scales that measure in grams. In order to do this, they created a relationship between the atomic mass unit and the gram, and that relationship looks like this:

This relationship means that if we had Avogadro's number, or one mole, of carbon-12 atoms (which has an atomic weight of 12 amu by definition), that sample of carbon-12 would weigh exactly 12 grams. Chemists use this relationship to easily convert between the measurable unit of a gram and the invisible unit of moles, of atoms or molecules.

Now that we know how Avogadro's number comes in handy, we need to examine one last question: How did chemists determine how many atoms are in a mole in the first place? The first rough estimate came courtesy of physicist Robert Millikan, who measured the charge of an electron. The charge of a mole of electrons, called a Faraday, was already known by the time Millikan made his discovery.

Dividing a Faraday by the charge of an electron, then, gives us Avogadro's number. Over time, scientists have found new and more accurate ways of estimating Avogadro's number, most recently using advanced techniques like using X-rays to examine the geometry of a 1 kilogram sphere of silicon and extrapolating the number of atoms it contained from that data. And while the kilogram is the basis for all units of mass, some scientists want to begin using Avogadro's number instead, much the way we now define the length of a meter based on the speed of light instead of the other way around.

Mole Day: A Day after a Chemist's Heart

You probably won't get the day off work or find your local drugstore flush with cards celebrating the occasion, but Mole Day is celebrated every year by chemists throughout the world. Since Avogadro's number is 6.022 × 1023, it only makes sense that the holiday starts at 6:02 a.m. every Oct. 23. Revelers tell chemistry jokes, blow bubbles of natural gas that they set ablaze, toast with drinks chilled by dry ice and even recite the mole pledge of allegiance.

Special thanks to Meisa Salaita, all-around chemistry whiz and the Director for Education & Outreach, NSF Center for Chemical Evolution, for her assistance with this article.