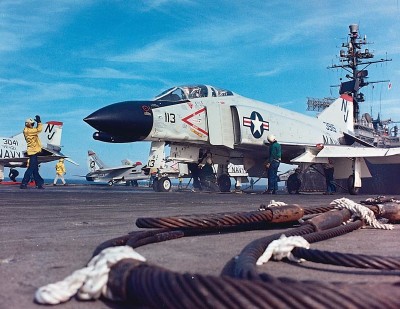 The McDonnell Douglas F-4 Phantom II was far from aesthetically pleasing, but its versatility and fearsome armament capability assure its place as one of the world's most effective and feared fighters. It dominated combat aviation in the 1960s, and proved its mettle during the Vietnam War. See more military jets pictures.
m

The McDonnell Douglas F-4 Phantom II started as the prototype McDonnell XF4H-1, which made its first flight on May 27, 1958, with crack test pilot Robert Little at the controls. After five years of strenuous effort, a happy combination of brains, determination, timing and luck enabled the McDonnell Corporation to deliver an aircraft that leapfrogged a generation of fighter aircraft in development.

Unlike most fighters, the XF4H-1 looked "all wrong," and over time it would acquire the nickname "Double Ugly." It had a drooped snoot, cranked wings, sagging anhedral tail surfaces and semisubmerged missiles. The cavernous slab-sided holes flanking the cockpit looked more like air brakes than air intakes for the huge General Electric J79 engines.

Despite the plane's ungainly looks, McDonnell hoped that it might sell as many as 376 fighters to the Navy. Twenty-three years later, the last of 5195 F-4s rolled off the production line, the last built under license by Mitsubishi. In numbers and in effect, the Phantom was the most important Western fighter of the Cold War, with 11 countries beside the United States relying on it.

The Phantom II, as it was named by company founder James S. McDonnell, soon set such a galaxy of records that every air force in the world realized that a new and potent player was on the scene. In its first few years, the McDonnell Phantom set eight new aviation records, among them altitude (98,557 feet), speed (1,390 mph), and time to climb (9,000 feet in 34.5 seconds).

This was a breathtaking performance for any plane. It was phenomenal for a big two-seater originally intended to be a missile-equipped fleet-defense fighter for the Navy, but soon was tasked to do every mission in the book.

The performance of the McDonnell Douglas F-4 Phantom II was so exemplary that the United States Air Force selected it to be its front-line fighter. Many other countries soon clamored for a place on the production line. Still, there was some internal opposition to the Phantom within the USAF, for the craft was a two-seat airplane and did not carry a gun. Opposition quickly evaporated in the face of the F-4's (as it was redesignated) blistering Mach 2 speed and its ability to carry huge loads of ordnance.

Keep reading about the McDonnell Douglas F-4 Phantom II, and learn about the airplane's specifications, in the next section.

American fighter pilots in the Vietnam War were anxious to come to grips with their MiG opponents, who did not seek dogfights -- their goal was to force the incoming strike flights to jettison their bombs.

Col. Robin Olds, a World War II ace and commander of the 8th Tactical Fighter Wing at Ubon Royal Thai Air Force Base, Thailand, decided to force the issue with a trick. He created "Operation Bolo" by which his F-4s would fly in the same formation and routes as attacking Republic F-105s typically used.

On Jan. 2, 1967, Olds led his Wolfpack into the air. The Vietnamese ground controllers interpreted the flight as an attack by F-105s, and launched their MiG-21s. As Olds' formation hit its time-over-target, MiG-21s began popping up through the under-cast. In short order, seven MiG-21s were shot down, with no losses to the F-4s. Operation Bolo had been a complete success.