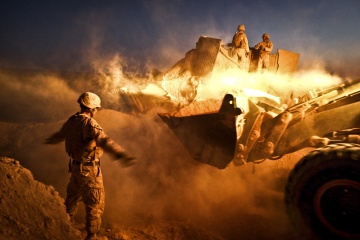 Combat engineers from the Marines tear down patrol bases throughout Helmand province in Afghanistan in December 2011, paving the way for Afghan pullout by U.S. troops.
© Cpl. Bryan Nygaard/US Marines/Handout/Digital/Corbis

In the Army, you're allowed to pick the military occupation specialty (MOS), which gives you a broad idea of a career. For instance, field 12 is the overarching category for engineers, while an MOS 12B is a combat engineer. Of course, if you don't meet requirements –and that can be either physical or a low score on the Armed Services Vocational Aptitude Battery (ASVAB) – or the Army doesn't have any openings in that area, then you might not get the job you want. A combat engineer requires an 87 or above on the combat portion of the ASVAB [source: Army].

Assuming the soldier navigates the MOS selection process successfully and gets that 12B designation, it's off to basic training. Anyone wishing to be a U.S. Army combat engineer will have to complete the standard 14 weeks of One Station Unit Training, which consists of Basic Combat Training and Advanced Individual Training (AIT). Attending the AIT Engineer School, you can choose from combat engineering, general engineer or geospatial engineer operations.

Combat engineering is designed to support infantry missions, so the AIT portion focuses on skills that are useful for engineers who are in the thick of combat. That means that combat engineers are being trained in a wide swath of engineering duties. Not only are they responsible for what most of us think are the more traditional engineering roles (like aiding mobility of troops by constructing a bridge), they're also the ones who are in charge of explosives. Although it might seem a far cry from an engineer's purveyance, a combat engineer's familiarity with explosives makes sense when you realize that these are the soldiers responsible for clearing a route or terrain -- often a business most efficiently done with explosives. Demolitions, in other words, is just as important to a combat engineer's training as construction. And for that reason, many combat engineer casualties and fatalities are related to explosives -- incidents involving clearing improvised explosive devices, for instance.

In recent conflicts like Afghanistan and Iraq, bomb clearing is also an important part of a combat engineer's duties. These soldiers might work with advanced mine-detecting equipment while fellow infantrymen engage enemy combatants. This combined-arms approach is unusual but useful when IEDs are present in a combat situation [source: MacLeod].

Just like any enlisted private, a combat engineer starts off with a base salary of about $18,000 a year [source: Army]. (Do keep in mind that housing and other costs are paid for.) The Army recommends that people seeking a combat engineer role have an interest in mechanics and engineering. The job also would certainly prepare a soldier for a good civilian job: Construction and building inspection are two possible career prospects in civilian life. Civil or mechanical engineering also would be a natural fit.

Author's Note: What does an Army combat engineer do?

If you have a completely insane penchant for complicated mechanical spatial logic and getting shot at, combat engineering is the way to go. I found myself completely in awe of the men (and women), at the Sapper Leader Course who choose such an intellectually and physically demanding role in the Army.