For more than 800 years, a series of mesmerizing statues have towered over Rapa Nui, a remote, 15-mile-wide (24-kilometer-wide) island in the southeast Pacific Ocean. The 40-foot-tall (12-meter-tall) statues, known as the moai, may have survived nearly a millennium, but the effects of climate change now threaten to topple the island's mysterious ancient history.

The nearly 1,000 moai, erected between the 10th and 16th centuries on Rapa Nui (also named Easter Island by an 18th-century Dutch explorer), are being battered by rising sea levels, high-energy waves and increased erosion, as detailed on March 15, 2018, in The New York Times. Ancient human remains are buried beneath many of the works, which appear as giant faces gazing over land and sea.

"Some of the moai have been knocked over in the past — including by tsunamis — and they have been restored. So not every site is in pristine condition," says Adam Markham, deputy director of climate and energy at the Union of Concerned Scientists. "The difference now is that the danger is even greater. The rate of change is faster than ever."

The volcanic island, now part of Chile, is the most isolated inhabited landmass in the world, located some 2,200 miles (3,540 kilometers) from Chile's mainland and 2,500 miles (4,023 kilometers) east of Tahiti. Part of Rapa Nui's vulnerability lies in the fact that it is an island and many of the moai and the ahu, or platforms, on which they stand, are perched around its edges. As Markham points out, all of the world's islands have been made vulnerable to erosion with rising ocean levels. Some climate models predict that increased melting of the world's ice sheets could cause oceans to rise by 5 or 6 feet (1.5 or 1.8 meters) by the year 2100. Higher sea levels mean shores face flooding and inundation by crashing waves.

On Rapa Nui, signs of damage from the incoming waves is already apparent. On the island's southern coast, blocks of a 10-foot-high (305-centimeters-high) stone wall at a site called Ura Uranga Te Mahina, toppled over last year, according to a report in the University of the Highlands and Islands Archaeology Institute. Ovahe Beach, at the island's northern coast, used to be covered in pink sand, says the report, but waves have carried away most of the sand, leaving behind rocks. A nearby burial site has been left exposed and vulnerable to erosion. Conservationists are testing a newly built sea wall at one part of the island to see if it can offer protection, according to The New York Times, but it's not certain that walls can hold off the ocean's onslaught.

Further inland, a site called Orongo, which encircles a volcanic crater, also stands vulnerable to storms and erosion. It was here in the 1600s, where members of the "Birdman" cult would stage an annual competition. Young men would scale down the crater's edge, enter the ocean and swim to a nearby island. Once on the island they would collect eggs laid by the sooty tern and swim them back home. The first to bring an egg back to the start was the winner and his clan would rule the island the following year. Hieroglyphics at the crater site tell the tale of the annual competition, and now landslides and erosion triggered by storms threaten these stoned-carved images.

As Markham points out, increasing frequency of intense storms is another hallmark of climate change. "As you get more and more of these events," he says, "damage builds upon past damage."

Is Relocation an Option?

Moving the hieroglyphics and some of the most vulnerable moai into protected enclosures might help ensure their survival. But relocating the statues could not only harm the works, it would also disregard their role at many of the sites as burial markers for remains of the island's ancestors. The 1995 recognition of Rapa Nui National Park as a UNESCO World Heritage Site acknowledges the importance of the statues' preservation where they now stand.

"It's the same problem that anyone would have when thinking about moving generations of history buried within a cemetery," Markham says. "A lot of very hard choices will have to be made but I would doubt that much moving of artifacts will take place on Easter Island."

This isn't the first time the island has faced ecological destruction. In fact, some have pointed to Easter Island's history as a cautionary environmental lesson. Pollen grains found in the island's sediments suggest it was covered in palm forest when it was first settled around 1200. By the time a Dutch settler came upon the island's shores in the 1700s, he described the land as being of "singular poverty and barrenness." What had happened to the island's trees?

An "ecocide" theory popularized by U.S. biologist Jared Diamond in his 2005 book, "Collapse — How Societies Choose to Fail or Succeed," suggests the island's human population may have overexploited the land by cutting down most of its forests.The depletion of forests would have left soil vulnerable to erosion, making it difficult to plant crops.

That account, however, is still up for debate. Subsequent research has suggested that other factors, including the introduction of the Polynesian rat and shifts in climate, could have contributed to the island's deforestation. "There's a lot of ongoing argument about the island's history and what were the driving factors of its deforestation," says Markham. "But in general, there are hundreds of other places around the world where we can demonstrate that overusing resources and not caring for the landscape can lead to huge problems."

Today the island is mostly covered in meadow and home to a year-round population of about 5,700 people. The island's economy is totally dependent on tourism, and last year it was visited by some 100,000 people who spent more than $70 million at local businesses. Economics are one part of what's at stake should the island's artifacts be destroyed by climate change. Perhaps even more profound, is the vulnerability of a historic legacy that's vital not only to the people of Easter Island, but also to the world.

"Easter Island matters to the local people who live there but it is also a place of global heritage," Markham says. "The island carries an ability to connect with people's sense that it is important for all of humankind."

Now That's Strange
The Tukuturi moai on Easter Island is different from all the others, and nobody really knows why. It is much smaller and is kneeling with its hands on its legs. It has buttocks and the remains of a beard, which none of the others seem to have, and lacks the elongated features of the other moai statues.

The People of Martha's Vineyard Once Shared a Sign Language 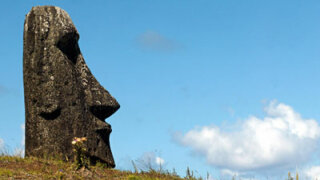 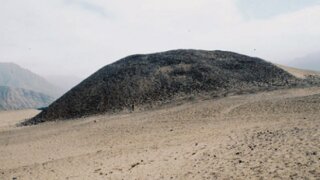 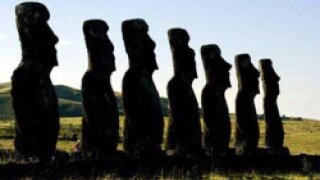