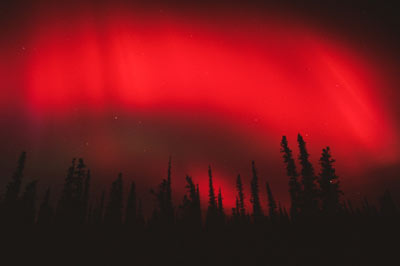 ­The aurora borealis (the Northern Lights) and the aurora australis (the Southern Lights) have always fascinated mankind, and people even travel thousands of miles just to see the brilliant light shows in the earth's atmosphere. The auroras, both surrounding the north magnetic pole (aurora borealis) and south magnetic pole (aurora australis) occur when highly charged electrons from the solar wind interact with elements in the earth's atmosphere. Solar winds stream away from the sun at speeds of about 1 million miles per hour. When they reach the earth, some 40 hours after leaving the sun, they follow the lines of magnetic force generated by the earth's core and flow through the magnetosphere, a teardrop-shaped area of highly charged electrical and magnetic fields.

­As the electrons enter the earth's upper atmosphere, they will encounter atoms of oxygen and nitrogen at altitudes from 20 to 200 miles above the earth's surface. The color of the aurora depends on which atom is struck, and the altitude of the meeting.

All of the magnetic and electrical forces react with one another in constantly shifting combinations. These shifts and flows can be seen as the auroras "dance," moving along with the atmospheric currents that can reach 20,000,000 amperes at 50,000 volts. (In contrast, the circuit breakers in your home will disengage when current flow exceeds 15-30 amperes at 120 volts.)

The auroras generally occur along the "auroral ovals," which center on the magnetic poles (not the geographic poles) and roughly correspond with the Arctic and Antarctic circles. There are times, though, when the lights are farther south, usually when there are a lot of sunspots. Sunspot activity follows an 11-year cycle. The next peak will occur in 2011 and 2012, so opportunities to see auroras outside their normal range should be good.

For more information on auroras, check out the links on the next page.

Battle Epic: When Hurricanes Clash With Volcanoes
What Is Relative Humidity and How Does it Affect How I Feel Outside?
How rare are double rainbows?