Could there be a triple rainbow? 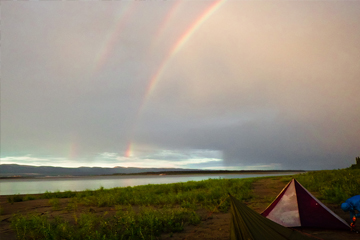 Many of us know that triple rainbows are very rare, but why is it so hard to find the weather phenomenon?
Anthony DeLorenzo via Wikimedia Commons

Charles Montgomery Burns (aka the evil Mr. Burns from TV's "The Simpsons") asks a similarly plaintive question in his autobiography "Will There Ever Be a Rainbow?" We'll do our best to answer it – and unlike Mr. Burns we won't use a ghostwriter.

Unlike ho-hum rainbows and even double rainbows (sorry, awe-inspired YouTubers, but they happen quite a bit), triple rainbows are not your run-of-the-mill weather phenomenon. In fact, they're so rare that prior to a 2011 image that we'll talk about later there had only been five verified reports of triple rainbows in 250 years [source: Byrd].

Let's get a quick tutorial in how rainbows work. When light (in this case, sunlight) enters a raindrop, it reflects once off the back of the drop, and then bends again as it leaves the drop [source: Mass]. This is when you see a single rainbow.

If light is reflected twice in the drop of water, you're going to get yourself a double rainbow [source: Byrd]. As we said earlier, double rainbows are not so unusual, because it's not that rare to have light coming from a couple of different angles.

But it's a way different story when it comes to triple rainbows. Technically the same idea applies – the water must reflect the light three times. Yet this is not so easy. There are specific conditions necessary to get the right light and atmosphere. According to Raymond Lee, a professor of meteorology at the U.S. Naval Academy, they include dark clouds and a shower of uniformly sized drops [source: Geere].

Back to that picture that surfaced in 2011. After talk about the ideal conditions for triple rainbows, a few people got interested in trying to record some. Photographer Michael Grossman got some extraordinary photography of a triple rainbow in 2011 and, that same year, meteorologist Michael Theusner published a paper citing evidence that he captured a quaternary rainbow [source: Theusner].

The lesson here? If you really want to impress the Internet, post a video of yourself losing it over a quadruple rainbow.

Battle Epic: When Hurricanes Clash With Volcanoes
Yes, Wind Can Blow You Away If It's the Right Speed
1816 Was the Year Without a Summer