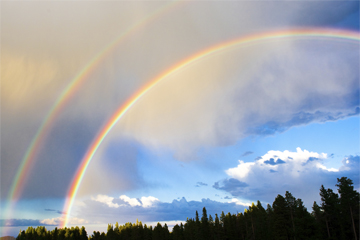 Double rainbows are pretty great, but they're not as rare as you might think.
colebech/ThinkStock

If you were to go by viral video alone, you might be under the impression that double rainbows are not just uncommon, but the most extraordinary feat that nature has created. And hey, that's cool — double rainbows are pretty sweet, and we have no reason to be cynical and mean to those who get animated about them. If seeing a rainbow sends a thrill down your spine (as it would to any decent person), than seeing two deserves twice the excitement. Go for it! The world is full of rare and astonishing things!

Alas, a double rainbow is not one of them.

Listen, though, this doesn't mean that double rainbows aren't double cool, or double pretty or double awe-inspiring. Sure they are. But they're not actually rare — something you may yourself have suspected if you've seen a couple double rainbows in your lifetime. Let's talk a little about how double rainbows show up in the sky, and why their formation isn't that unusual. And lucky for you — that means a science lesson in refraction.

Before you roll your eyes in boredom, be assured that a refraction tutorial needn't be painful. Rainbows "happen" when sun hits a raindrop. The light bends (or refracts — see, not scary!) when it hits the drop, reflects off the back of the drop, and then bends again as it leaves the drop. In a process called dispersion, longer wavelengths (those we see as red) bend less than shorter (blue) ones [source: Mass]. That's why red is at the top of the rainbow in that longer, lazier arch, and blue is at the bottom in a shorter, tighter one.

A double rainbow occurs when the light is reflected twice in the drop. It means you can see two different reflections, coming from different angles [source: Plait]. This leads to something that is actually really cool — instead of seeing red at the top and blue at the bottom like a regular ho-hum rainbow, the secondary rainbow (which is higher and lighter in color than the primary) has the colors reversed [source: Margusity and Andrews]. Yup, Vib G. Yor — doesn't have the same ring as Roy G. Biv, does it now?

A much rarer phenomenon is called a "twinned" rainbow. That's when two separate arcs break off from the same primary base. Researchers from Disney (yup, that Disney) were trying to find a way to simulate and animate rainbows better, and stumbled upon the idea that raindrops of different shapes or sizes (usually from two rain showers combining) lead to twinned rainbows [source: ScienceDaily].

What’s a nor’easter?
Why Does the U.S. Use Fahrenheit Instead of Celsius?
What is the rarest weather phenomenon?