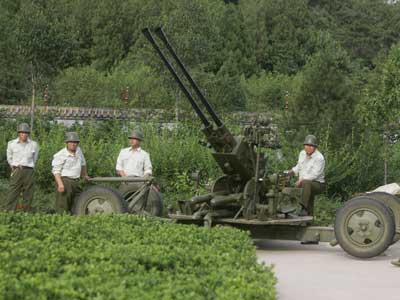 Chinese athletes won 51 gold medals in the 2008 summer games -- the most of any participating nation [source: NBC]. The Beijing Weather Modification Office celebrated another key victory: the opening ceremony's defeat of its dreaded adversary, the storm cloud. The ceremony went by without a drop, the temperature never rose above 83 degrees Fahrenheit (29 degrees Celsius) and most of the day passed with no more than a few scattered clouds. Impressed? Well, not everybody's sold on cloud seeding.

The United States began weather control research in 1946. Currently, some states use cloud-seeding programs in an attempt to increase precipitation levels or prevent crop-damaging hail. An eight-year experiment in Texas and Oklahoma, conducted over 5,000 square miles (12,950 square kilometers), showed that cloud seeding increased rainfall, cloud height, length of storms and the area in which rain fell [source: Eckhardt]. Even so, enthusiasm for cloud seeding in the U.S. has dried up since the early 1970s, when federal funding was about $19 million a year [source: Cotton, Engber]. Now states have to kick in the dough if they want to try ruling the skies.

Internationally, Russia, Israel, Thailand, South Africa and Caribbean nations have all tried their hand at cloud seeding, with mixed results. Australian scientists­ conducted numerous experiments, discovering that static seeding didn't appear to be effective over Australia's plains but was very effective over Tasmania.

In 2003, the United States National Academy of Sciences declared that 30 years of studies had not produced "­convincing" evidence that weather modification works [source: Associated Press]. On the other hand, the American Meteorological Society claims that some studies on cloud seeding show a 10 percent increase in rain volume [source: Eckhardt].

­Cloud seeding is quite expensive, though potentially cheaper than other projects, like diverting rivers, building new canals or improving irrigation systems. Then again, the allure of cloud seeding may redirect attention and funding from other projects that could be more promising. Then there are questions about altering weather. Are some areas taking moisture out of the air that would have fallen as rain in another region? And if regions are experiencing drought due to climate change, isn't effort better spent tackling the causes of global warming?

Despite reassurances from cloud-seeding companies, concerns also remain about expo­sure to silver iodide toxicity and soil contamination. Other safety issues are more transparent. In China, wayward munitions have damaged property and even killed one person in May 2006. The Chinese government contends that it has improved training, licensing and safety practices. In the end, cloud seeding has strong supporters, but it remains controversial.

Scientists may not be sure if cloud seeding actually works, but despite the skepticism, China is moving forward. The nation spends $60 to $90 million a year on weather modification, in addition to the $266 million spent from 1995 to 2003 [source: Things Asian]. The government plans to produce 1.7 trillion cubic feet (50 billion cubic meters) of rain a year through the practice [source: Aiyar].

Is cloud seeding just a way of sweeping pollution and climate change under the rug and playing God to ensure you don't have to schedule a rain date? Or is it merely a matter of tweaking weather to your advantage? However you look at it, it's not likely to go away any time soon. In fact, scientists have already proposed building fleets of massive, unmanned ships to seed clouds over Earth's oceans to provide a cooling counter to carbon dioxide-induced global warming [source: Cartlidge]. If cloud seeding is ultimately a way to "fake it" when guests come to visit or crops need a sprinkle, do we really want a world where we have to manually adjust the planet's atmosphere just to stave off environmental disaster?

For more information about cloud seeding, weather control and other related topics, explore the links below.