Are you safe from lightning if the skies are clear? 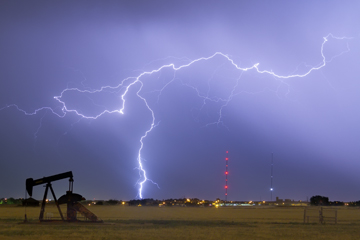 We forget just how threatening lightning actually is, but one hit could cause long-term damage.
StrikingPhotography/Thinkstock

In a fair world, we would all be able to count on some simple rules: You can't drown if you're not in water, you can't burn if there's nothing hot near you and you can't be struck by some errant lightning bolt on a clear, pastoral day. If you haven't yet heard, let us be the first to break the news: Life isn't fair. You can aspirate drinking a glass of water. You can spontaneously combust. And yes, you can absolutely be hit by lightning on the kind of sunny day that the poets write about. It's a cruel place out there, and the important lesson is that you're never safe from anything and should live in fear your whole life.

OK, perhaps not. Because — unsurprisingly — the truth is that (1) people are fairly adept at drinking water, (2) human combustion isn't even scientifically proven and (3) while lightning can indeed strike on a lovely day, it's fairly unlikely you'd be hit. In the sense that, you know, it's fairly unlikely to be hit by lightning period, let alone on a day where lightning isn't already showering down all around you. But in the spirit of kinda freaking everybody out, let's just be clear that it can happen — and has.

If you're as skeptical of clear-day lightning as you are of human combustion, let's start with a bit of background on thunderstorms. So, clouds that create electrical charges cause lightning, then there has to be warm, humid air near the surface of the ground that travels up into the much cooler atmosphere. The clouds accumulate and electricity begins sparking [source: Sohn].

Now, don't assume you're crazy if you read that and are left thinking that our whole "clear day/lightning" thesis is in question. After all, what sense does it make to say that you must have clouds to form lightning but that lightning can come from a clear blue sky?

The key is that there could be storms in your area, but you just might not see them. Nope, that doesn't mean they're hidden in outer space and striking you down from the heavens. It means that bolts of lightning don't always take a strictly vertical route to the ground. Lightning has been recorded striking an astonishing 25 miles (40 kilometers) away from its cloud of origin, traveling a not-so-lazy horizontal route before it eventually reaches the ground. Remember too that lightning doesn't just strike in one place; while you might see a single flash in the sky, the bolt often branches off and hits in several places [source: Sohn].

A good rule of thumb? Even if the sky directly above you is cloudless and pretty, take cover if you hear thunder [source: FSU]. You don't want to be visited by a traveling bolt.

Can you predict winter weather based on summer weather?
Becoming Better Solar Meteorologists, With Help From Some Monster Waves
How Clouds Work