Other Weather Phenomena: It's Raining Tomatoes 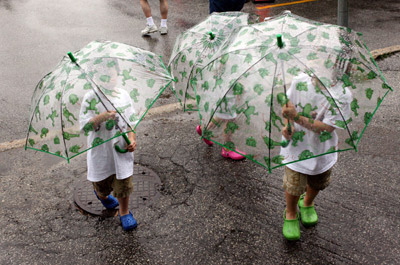 Frogs can travel tremendous distances in the vortex of a waterspout. Waterspouts can move across hundreds or thousands of miles, although that's extremely rare. It's more common for frogs to travel just a few miles before they fall to the ground.

Reports of strange objects falling from the sky are numerous and varied. People have reported raining squid, worms and fish. Fish are actually the most common creatures to fall from the sky, for obvious reasons -- they're very lightweight, and they're the most common water inhabitants [source: BBC]. But waterspouts can pick up heavier objects, too.

Waterspout winds can spin at amazing speeds -- up to 200 mph [source: CMMAP]. These types of wind speeds can pick up a very wide range of cargo because they can suck up objects from up to 3 feet (1 meter) below the surface, and the low-pressure core they form is an extremely powerful vacuum compared with the speeding winds surrounding it. Large water birds have also fallen from the sky. At least one source reports a sailboat coming down with rain [source: CMMAP]. Presumably a waterspout can pick up a few things when it hits land, too, because it has also been known to rain tomatoes and coal [source: CMMAP].

But it's when the frogs, fish and other water animals hit the ground that things really get gross. It's unlikely they survive the journey, what with the speeding low-pressure vortex and the impact once that vortex dissolves. Usually, the frogs die, although it's unclear when exactly that happens -- during the trip or as a result of the fall.

However, sometimes the frogs luck out. When it rained frogs in a small town in Serbia in 2005, people walked outside after the storm to see their streets blanketed in frogs trying to hop their way back to water.

For more information on frog rain and related topics, look over the links below.

Animals don’t have to be near water to get lifted into a storm. High-pressure storm winds can lift birds so high in the air that they freeze, falling to the ground like rain when the winds subside.