Trees and our Climate 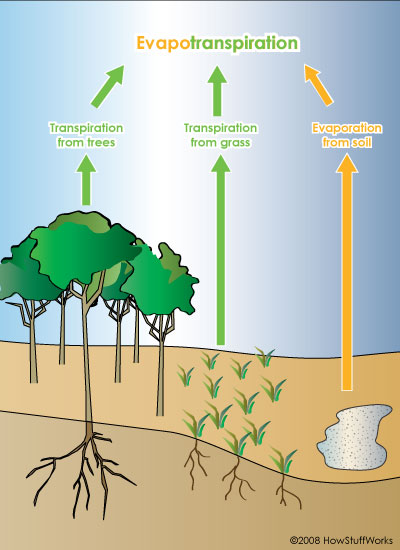 Trees affect our climate, and therefore our weather, in three primary ways: they lower temperatures, reduce energy usage and reduce or remove air pollutants. Each part of the tree contributes to climate control, from leaves to roots.

Leaves help turn down the thermostat. They cool the air through a process called evapotranspiration. Evapotranspiration is the combination of two simultaneous processes: evaporation and transpiration, both of which release moisture into the air. During evaporation, water is converted from liquid to vapor and evaporates from soil, lakes, rivers and even pavement. During transpiration, water that was drawn up through the soil by the roots evaporates from the leaves. It may seem like an invisible process to our eyes, but a large oak tree is capable of transpiring 40,000 gallons of water into the atmosphere during one year [source: USGS].

The outdoor air conditioning provided by trees reduces the energy used inside your home or office. Shade provided by strategically planted deciduous trees cools buildings during the warm months, allows the sun's warming rays to shine through its branches in the winter and also protects buildings from cold winds. With some planning, urban trees can help minimize the heat island effect that saddles many cities.

Heat islands are cities that are often several degrees warmer than the suburbs because the urban areas generate and trap heat. Studies of Atlanta found that temperatures downtown were 5 to 8 degrees hotter than those in the suburbs. This, in turn, increased the number of local storms [source: NASA]. Phoenix is also warmer than its outlying areas. In 1950, Phoenix was 6 degrees warmer than the nearby Casa Grande Monument. By 2007, however, the temperature difference increased to 14 degrees [source: Christian Science Monitor].

When trees grow throughout urban areas, both surface and air temperatures are reduced. Researchers have found that planting one tree to the west and one to the south of a home can significantly reduce energy consumption. In the Environmental Protection Agency's study, annual cooling costs were reduced by 8 to 18 percent while annual heating costs were reduced 2 to 8 percent [source: EPA].

Leaves also filter particles from the air, including dust, ozone, carbon monoxide and other air pollutants. Through the process of photosynthesis, trees remove carbon dioxide (a greenhouse gas) and release oxygen into our air. Trees store the carbon dioxide, called carbon sequestration, and -- depending on the size of the tree -- can hold between 35 to 800 pounds of carbon dioxide each year [source: EPA].

Trees aren't our saviors from smog, though. Photochemical smog is smog caused when sunlight and chemical compounds such as car exhaust combine. Trees contribute to this when they release organic gases.

Additionally, planting trees as a solution to global warming -- a practice commonly linked to carbon offsets -- may have a positive impact on global temperature control only when planted in the tropics, a thin geographical belt around the equator. Normally, trees help cool the planet by absorbing carbon dioxide as part of the photosynthesis process and by evaporating water into the air. In the tropics, water evaporates naturally from trees, increasing cloud cover and keeping temperatures cooler. Outside of the tropics, however, researchers are finding that forests trap heat because their dense, dark canopies absorb sunlight.

To learn more about climate change, pollution and other environmental issues, explore our resources on the following page.