Take Me to the River 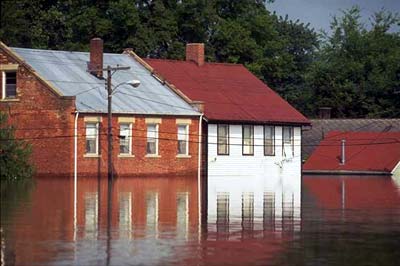 Flooded streets in St. Genevieve, Missouri. The small town was one of the many midwestern cities devastated by flooding in the summer of 1993.
FEMA News Photo

In the last section, we saw that the degree of flooding is determined by the amount of water that accumulates in an area, as well as the nature of the land surface. As civilization has expanded, human beings have altered the landscape in a number of ways. In the Western World, one of the most significant changes has been covering the ground in asphalt and concrete. Obviously, these surfaces are not the best sponges around: Almost all rain that accumulates becomes runoff. In an industrialized area without a good drainage system, it may not take much rain to cause significant flooding.

Some cities, such as Los Angeles, have constructed concrete flood-relief channels to prevent this problem. When it rains a lot, the water flows into these channels, which meander out of the city where the water can be better absorbed. These sorts of systems may cause flooding farther down the line, however. When you cover an area in concrete and asphalt, you are essentially cutting off part of the Earth's natural sponge, so the rest of the sponge has a lot more water to deal with.

A similar problem can arise with levees, large walls built along rivers to keep them from overflowing. These structures extend the natural banks of the river so that much more water can flow through it. But while they may be effective at keeping water out of one area, they usually make problems worse for an area down the line, where there are no levees. That area gets all the flood waters that would have spread out farther up river. Another danger of levees is that, like dams, they can break. When this happens, a large amount of water flows out onto the land in a short period of time. This can cause some of the most dangerous flood conditions.

People haven't had much success with controlling flooding along coastlines. Excessive water in these areas is particularly destructive to man-made structures because of the erosion it causes. One method of controlling this erosion is to build fences and walls where the water meets the land. This keeps the power of the waves at bay, so they don't wear down the beach. But the structures also interfere with the process of beach formation. When you block the water from moving against the coast, the ocean can't distribute sand and you don't get beautiful beaches.

Another problem with fences and walls is that there is only so much they can do. Fundamentally, beaches are changing environments, molded by the overpowering force of the ocean. They are, by their very nature, supposed to be eroded and moved by the dynamic action of waves. Flooding is a regular part of this process, and most likely will continue to be no matter what we do.

A breeched levee along the Mississippi River, during the great flood of 1927
Photo courtesy NOAA

The same can be said for many inland areas. While a river may appear to us to be a stable, unmovable feature of the landscape, it is really a vibrant, dynamic entity. This is particularly true of big rivers, such as the Mississippi in the United States and the Yangtze and Huang He in China. Over time, these waterways expand, shift their path dramatically and may even change the direction of flow. For this reason, the land around the banks of a river is highly susceptible to flooding.

Unfortunately, rivers are also natural draws for civilization. Among other things, they provide a constant supply of water, rich soils and an easy means for transportation. When the water level is low, people build all along its banks and enjoy all its benefits. At some point, it comes time for the water to shift, and the people who have built along the flood plains quickly discover that they are living on unsound ground. If there is extensive construction in these areas, the flood damage can be devastating.

In the next section, we'll look at the different sorts of flood damage to see how ordinary water can be a devastating force.