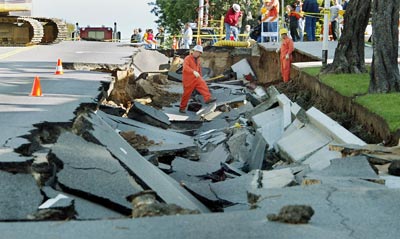 A broken water main collapsed part of the street in Los Angeles in December 2002. Sinkholes caused by water eroding the foundation of streets are a big problem in Los Angeles.
Mike Nelson/AFP/Getty Images

In urban settings in particular, sinkholes may owe their development to human activity as much as anything else. In some cases, sinkholes appear because of the combination of industrial activity or development, soft limestone bedrock and less than 200 feet (61 meters) of overburden [source: Southwest Florida Water Management District]. The following human actions can also cause sinkholes:

Sinkholes may also form in places where water flows regularly, such as a storm drain, or when water sources are diverted or cut off, especially by pumping out groundwater. A broken pipe can contribute to sinkhole development by flooding and weakening the soil, but it can also provide an outlet for the dirt and rock that's supposed to surround pipes. After enough material falls into pipes and is transported away, the surrounding earth becomes destabilized, contributing to sinkhole formation, sewage or water spills, or other disasters.

­One­ of the worst human-caused sinkholes occurred in 1994 in Polk Cou­nty, located in Central Florida. First, some background: 30 percent of the world's phosphate comes from Florida and often ends up as an ingredient in fertilizer [source: Laufenberg]. That booming phosphate industry comes with tons of mildly radioactive waste known as phosphogypsum. Florida mining companies arrange phosphogypsum into massive stacks that can cover hundreds of acres and weigh millions of tons. Other phosphogypsum disposal methods, including recycl­ing it for use in construction or artificial reefs, have yet to take off because of debate over whether the material is too radioactive to reuse. Almost a billion tons of the stuff is stacked in Central Florida [source: EPA]. All that weight pressing down on the soft, sinkhole-riddled Florida terrain can lead to disaster.

So it was in 1994, when one of these stacks collapsed into a 150-foot (46-meter) deep sinkhole. Millions of tons of phosphogypsum entered the sinkhole and polluted the state's water supply. The cleanup cost millions and cast a light on both the problem of sinkholes and the need to find uses for the millions of tons of byproduct waste produced by the state's phosphate industry.

­We've talked about how sinkholes form and some of the basic hazards involved. But what other problems can they cause? We'll explore that subject in more detail on the next page.

­Again with the Fertilizer!

In Berezniki, Russia, a giant sinkhole first appeared in 1986, apparently when a potash mine was flooded. The sinkhole now measures 656 feet (200 meters) deep, 262 feet (80 meters) long and 131 feet (40 meters) wide -- and growing. The sinkhole threatens the region's massive potash industry. Potash is an important ingredient in many fertilizers.