Detecting and Dealing with Sinkholes 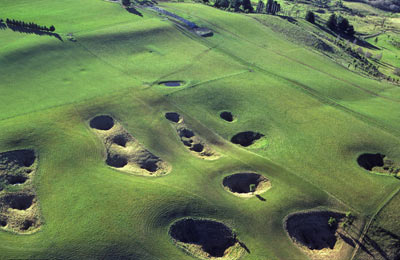 We have some bad news for you if your house is located in a landscape like this.
G. R. 'Dick' Roberts/NSIL/Getty Images

Sometimes we don't need a government agent to confirm that a sinkhole honeycombs the area. Rather, it's obvious from the gaping hole in the ground. But other times, sinkholes may be difficult to detect -- for example, if they're still covered with a thin overburden that has yet to collapse into the void below. Property damage, especially around the foundation, may be a subtle sign that something is wrong. In addition, if vegetation is dying unexpectedly, a sinkhole may have disrupted underlying streams that usually feed the plants. Other signs to look for include polluted or muddied well water, formation of new ponds and trees, or sign posts that appear to be slumping over.

Some people use sinkholes as makeshift trash cans when, in fact, anything thrown in them may end up in the local water supply. In many communities, this practice, in addition to being harmful to the environment, is illegal [source: Pennsylvania Department of Environmental Protection].

­If your house suffers damage from a sinkhole, it may be covered by homeowner insurance. Sinkholes generally should be fenced off or otherwise marked. The Southwest Florida Water Management District recommends filling them in with sand, though many homeowners turn to professional contractors [source: Southwest Florida Water Management District]. If they sit on public property, city officials need to be contacted. A severe sinkhole found on public or private land may have to be repaired with concrete or require earthmoving equipment to stymie erosion.

The United States can't afford to ignore sinkholes. The country's aging sewer and water systems have experts worried that deadly sinkholes like Guatemala City's could develop [source: Rooney]. Their worries, no doubt, are founded on the fact that many essential infrastructure improvements across the country have been neglected. Pipes, bridges and the like that were intended to last 50 or so years are approaching or have passed their intended shelf life [sources: Rooney, Wald]. For example, you may remember the disastrous Interstate 35W bridge collapse in Minneapolis that occurred on Aug. 1, 2007, and killed 13 people. Authorities later attributed the bridge collapse to faulty design and the gradual addition of more weight, such as concrete lane dividers, without upgrading the bridge's support systems.

­We already discussed the large sinkholes in Polk County, Fla., Guatemala City and Berez­niki, Russia. On the next page, we'll look at some other unusual sinkholes from around the world.

Is Three a Crowd?

When several sinkholes come together to form a larger basin or hole, the new formation is known as a poljen.