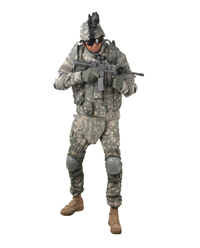 The soldier in the Future Combat System will be more linked in than ever, both providing and receiving real-time information on combat conditions.
Image courtesy U.S. Army

Michael Ignatieff, a member of Canada's Parliament, famously predicted a type of future warfare in which the battlefield would be run from afar by computers and analysts. He claimed that this virtual warfare would become even more difficult to conceptualize and organize -- and Ignatieff's prediction appears to have, in part, come true in the U.S. Army's vision of future battle [source: USNA]. The Army calls it Future Combat Systems (FCS), and the non-line-of-sight cannon is one essential part of that future.

The Future Combat Systems will employ unmanned vehicles like airborne reconnaissance drones, unmanned heavy vehicles like the Crusher, and remotely fired missile arsenals. Manned vehicles like the NLOS-C and its companion (the non-line-of-sight mortar), as well as troop and medical transport, will factor in as well. So, too, will the human soldier. But at the heart of the FCS is the network.

The Army's FCS will rely on battlefield integration and networking in much the same way that past battlefields have relied on human intelligence, radios and maps. The high-tech glue that binds the FCS is LandWarNet, "a combination of services that extends voice, video and data transmissions to the edges of tactical formations" [source: Dept. of the Army]. The Army's vision of the near future of warfare is a ground force that is highly linked in, exchanging and receiving real-time information on everything from local weather conditions at the front, to enemy troop movement, to the location of a sniper's nest.

The idea behind this new concept of warfare is to save lives, both Americans' and local civilians'. To accomplish this, information is of the utmost importance. Unmanned drone scouts will link directly to soldiers in the field, alerting them to threats ahead. Soldiers will link to rear vehicles like the NLOS-C, allowing the cannons to take aim on targets that ground troops face. MGVs (manned ground vehicles) will also receive transmissions from drones, allowing cannons to fire directly on targets that ground troops are yet to meet.

It's been awhile since the Army made such sweeping changes to its infrastructure -- since the 1970s, actually. It was "the Army's development of the AirLand Battle doctrine during that period resulted in the M1 Abrams tank, the Bradley Fighting Vehicle, the AH-64A Apache attack helicopter, the UH-60A Black Hawk helicopter and the Patriot anti-aircraft missile," Rob Colenso, Director of Online Operations for Army Times Publishing tells HowStuffWorks. He explains, "These so-called 'Big Five' generally began arriving in Army units in the 1980s and remain a crucial part of the force today." Of course, they will become much less crucial as FCS comes online.

This kind of overhaul doesn't come cheap. In 2004, the price tag for the Army's FCS update was around $117 billion [source: Defense Tech].

But superior firepower is just one step toward peace. To achieve real reduction in losses of life on either side of a conflict, diplomacy will have to keep up with the forward-looking pace the Army has set with its Future Combat Systems.

For more information on the military and other related topics, visit the next page.