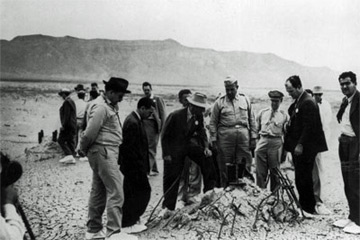 In March 1940, a team of scientists working at Columbia University in New York City confirmed the hypothesis put forth by Bohr and Wheeler -- the isotope uranium-235, or U-235, was responsible for nuclear fission. The Columbia team tried to initiate a chain reaction using U-235 in the fall of 1941, but failed. All work then moved to the University of Chicago, where, on a squash court situated beneath the university's Stagg Field, Enrico Fermi finally achieved the world's first controlled nuclear chain reaction. Development of a nuclear bomb, using U-235 as the fuel, proceeded quickly.

Because of its importance in the design of a nuclear bomb, let's look at U-235 more closely. U-235 is one of the few materials that can undergo induced fission. Instead of waiting more than 700 million years for uranium to naturally decay, the element can be broken down much faster if a neutron runs into its nucleus. The nucleus will absorb the neutron without hesitation, become unstable and split immediately.

As soon as the nucleus captures the neutron, it splits into two lighter atoms and throws off two or three new neutrons (the number of ejected neutrons depends on how the U-235 atom happens to split). The two lighter atoms then emit gamma radiation as they settle into their new states. There are a few things about this induced fission process that make it interesting:

In 1941, scientists at the University of California at Berkeley discovered another element -- element 94 -- that might offer potential as a nuclear fuel. They named the element plutonium, and during the following year, they made enough for experiments. Eventually, they established plutonium's fission characteristics and identified a second possible fuel for nuclear weapons.