How Photonics Masts Will Work

Dancing with the Gray Lady 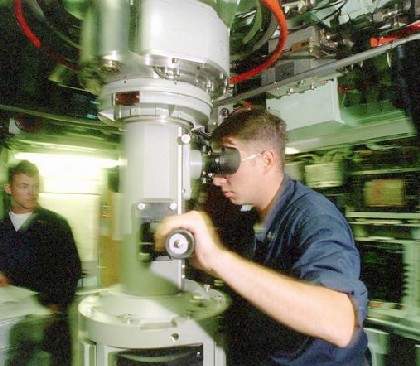 The orders "down periscope" and "up periscope" are, for most of us, completely tied in with our notion of submarines. These are phrases that we've heard countless times in submarine movies, in which there's usually a dramatic scene of a submarine captain hanging onto the handles of a periscope, looking out at the enemy above the water. Standing watch at the periscope like this is called "dancing with the gray lady."

A periscope's basic purpose is to allow submarine crews to see objects above the water while the ship remains submerged. A simple periscope can be constructed out of a vertical tube with mirrors placed at a 45-degree angle at the top and bottom of the tube. These devices basically collect light from an image and direct that light from one mirror at the top of the periscope to the mirror at the bottom of the periscope. Of course, modern submarine periscopes are more sophisticated than that.

In a submarine periscope, prisms are used in place of mirrors at the top and bottom of the periscope tube, aligned parallel to each other. The top prism collects light from an image and bounces that light, through as series of lenses and two telescopes that run the length of the periscope tube, down to a second prism. This prism at the base of the tube reflects the light into a secondary tube, which consists of two lenses, and then through the eyepiece.

Periscopes are contained inside a periscope well within the ship's sail. On submarines, "sail" is a term often used to describe the conning tower. This tower is the cylindrical chamber attached to the top of the submarine. It is traditionally located directly above the control room. The well runs from the top of the sail to the bottom of the ship. A periscope can rotate to give the operator a 360-degree view of the ocean surface. If there is an object (or enemy ship) that needs to be avoided, the submarine will dive. Once below periscope depth, sonar typically is used for navigation.

Newer submarines are equipped with two types of periscopes, one on the right (starboard) side and one on the left (port) side. For example, the USS Springfield has a Type 2 attack scope on the starboard side and a Type 18 search scope on the port side. The Type 18 scope is limited to operations in the daylight. It takes photographs with a 70-mm digital camera and then displays those images on a television monitor. Some periscopes also have night vision, a still camera, a video camera and can magnify images being viewed.