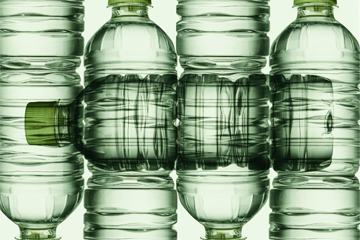 Man-made polymers include plastics like the one composing these water bottles.
Yagi Studio/Getty Images

If you've ever made a long paper chain, you already have a visual image of a polymer. The term comes from the Greek words poly, meaning "many," and meros, meaning "part." Combine the two and you get "many parts." The simplest definition of a polymer is long chain formed by joining many smaller molecules, called monomers [source: Larsen].

While a paper chain presents a simple image of a polymer, in practical applications, polymers have much greater uses. They make up the components of many objects used in daily life: plastic containers, nylon products, rubber tires and many more.

To understand polymers, we first need to get to know the monomer, which is a single molecule that has the ability to join with at least two other monomers. The process of joining is called polymerization, in which two separate molecules of the same or different types bind by sharing pairs of electrons. This union forms a covalent bond [source: Larsen].

When monomers join with other monomers through the process of creating covalent bonds, they form larger molecules, called polymers. The word polymer represents any unspecified number of monomer units – just any amount greater than one [source: Britannica].

The number of bonds created by the monomers dictates the resulting chemical structure of the polymer. If a monomer bonds with only two other molecules, the result is a chain-like structure. If it bonds with three or more molecules then three-dimensional, cross-linked structures can form [source: Innovate Us].

Polymers can occur naturally, or we can manufacture them. Two common examples of a natural polymer are the basic chemicals that define life: deoxyribonucleic acid (DNA) and ribonucleic acid (RNA). Other naturally occurring polymers include silk, wool, hair, fingernails, toenails, cellulose and proteins.

Man-made polymers are often commonly referred to as plastics; they can be shaped and molded into different forms with many household and industrial uses. Most synthetic polymers are derived from petroleum oil, and different types include nylon, polyethylene, polyester, rayon, Teflon and epoxy. The plastic or rubber items you encounter daily are all a type of polymer [source: Larsen].

The origin of man-made polymers traces back to Central America and the ancient Aztecs, Olmecs and Mayas, who all made a form of rubber by combining natural latex found in plants with the juice of morning glory vines [source: Kaufman]. The resulting rubber was more pliable than brittle latex, and was used to make sandals, as well as balls for ceremonial games. Approximately 3,000 years after the Central Americans were playing ball, Charles Goodyear combined natural rubber with sulfur to create vulcanized rubber, a polymeric substance still popular today – you may recognize Goodyear's name from the brand of automobile tires.

As you go about your day, stop and consider all the structures around you. It's hard to believe that a plastic lemonade container, the case around your smartphone or the tires that get you where you need to go, are all the result of tiny individual monomers bonding together to form polymers. Strength in numbers, right?

Peyote Is Endangered, Spiritually Sacred and Becoming Legal
The Ancient Element Bismuth Is the Pink in Today's Pepto-Bismol
What if I put aluminum foil in the microwave?