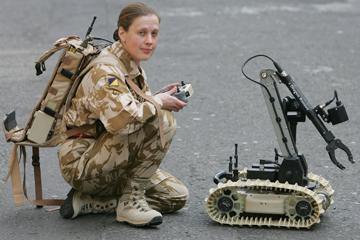 Captain Judith Gallagher displays an anti-IED robot known as the “Dragon Runner” in London. The robot fits in a backpack and has a camera to look under and around vehicles and other obstacles. The images are sent to a control center in real time. See more robot pictures.
Geoff Caddick/AFP/Getty Images

Paul Revere's 1775 ride through the Massachusetts night to alert people that British troops were advancing might have had a different ring to it if it came in the modern age of warfare. From the intelligence gathering and missile firing drones used in the U.S. war on terror to the army of mechanical bomb-diffusers relied on by U.S. forces in Iraq and elsewhere, more of the operations traditionally performed by soldiers are now in the hands of machines. Will the robots eventually replace human boots on the ground? At least one American military leader thinks so.

Gen. Robert Cone, the man in charge of the U.S. Army's Training and Doctrine Command, said in 2013 that machines like drones and robots could replace up to a quarter of troops in combat by 2030. In an effort to become "a smaller, more lethal, deployable and agile force," Cone said the Army was considering reducing the size of brigade combat teams to 3,000 from 4,000 soldiers. The potential move would be made possible, according to Cone, by enhanced robot technology on the battlefield [source: McLeary].

It's easy to understand the allure of robotic troops. War ain't cheap. In addition to the incalculable price that comes with putting soldiers in the line of fire, there is also the cost of training, feeding, supplying and housing them during active military operations. When the fighting stops, the bills for veterans programs, pensions and medical care continue to pile up. (A quarter of the 2012 Pentagon budget request was for benefits like these [source: Atherton]). Proponents say robot soldiers not only help keep humans out of harm's way, but also reduce the cost of operating and maintaining the U.S.'s military forces.

On the other hand, there are probably some things that robots just can't do. Or are there? Read on for a rundown of where robots are already supporting human troops and how they might be used in the future.