Can God and science co-exist? 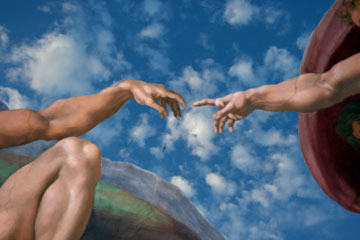 God and science co-exist? In many people, the two get along well.
©iStockphoto/david5962

Humans have debated the significance of God and science for centuries. To name just one example, they've battled over whether to teach creationism alongside or in place of evolution in U.S. public schools. People have taken sides; believers of science stand firmly on one side and followers of a higher power stay on the other. Yet, those on both sides might be surprised to learn that they can float between sides -- or switch teams entirely.

In his 2002 book, "Rock of Ages," paleontologist Stephen Jay Gould argued that religion and science can co-exist because they occupy two separate spheres of the human experience. Gould uses a term he previously coined, non-overlapping magisteria (NOMA), which is the concept that both religion and science have the authority to teach their respective dogma [source: Gould].

According to Gould, science and God are inherently divided and thus can easily co-exist in the human belief system. Science, he argues, answers questions of fact, while religion covers questions of morality.

While Gould's argument is valid, its attempt at reconciling God and science was quickly rejected by both atheists and religious adherents. The zoologist and atheist thinker Richard Dawkins called NOMA "an empty idea" and pointed that there are a number of areas where science and God compete for an individual's faith [source: Dawkins]. The debate over evolutionary theory is just one such flashpoint.

A 2009 study published in the Journal of Experimental Social Psychology suggests that humans can't reconcile two explanations as wildly different as creationism and evolution for their existence. The study found that, when exposed to descriptions of evolutionary theory that make clear that it's supported by science, participants were more susceptible to subliminal messages in support of the theory in a separate test later on. Conversely, those who had read that the theory "raised more questions than it answered" were less susceptible [source: Lloyd].

This study doesn't quite prove that science and religion are irreconcilable, though it adds to a body of work on the conflict thesis, a mid-19th century concept that holds that religion and science can't be reconciled.

Yet, several humans who subscribe to both faith in God and science show that the two can co-exist. Francis Collins, the founder of the Human Genome Project and a practicing Christian, is an excellent example. At a Pew Research forum, Collins pointed out several pieces of evidence of God's existence. He singled out concepts like the "unreasonable effectiveness of mathematics," an observation by physicist Eugene Wigner that math's most amazing quality is that it works so simply and elegantly [source: Pew Research].

Collins subscribes to the traditional tenets of evolutionary theory, beginning with the Big Bang, but has reconciled it with a belief in God. He believes that God created the Big Bang with the intent to create. Collins isn't alone; a poll taken in 1996 found that 40 percent of scientists say they believe in God [source: Bloom]. That was about the same percentage of Americans who said they believe in the theory of evolution in a 2009 Gallup poll. Twenty-five percent of Americans responded that they don't believe in evolution [source: Newport]. Perhaps it's the third group, the 36 percent of people who had no opinion either way, who represent the part of society where religion and science can co-mingle, or at least not be at odds.

Certainly, the existence of Francis Collins and people like him is evidence that God and science can co-exist, at least within the individual. Within society, that co-existence may be harder to find, especially as more individuals increasingly choose one or the other.