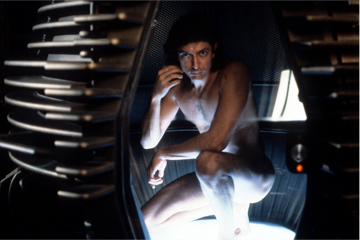 Seth Brundle, Jeff Goldblum’s character in “The Fly” reminds us just how messy the whole teleportation business can be.
20th Century-Fox/Getty Images

Sadly, the transporters of "Star Trek" and the telepods of "The Fly" are not only a far-future possibility, but also perhaps a physical impossibility.

After all, a transporter that enables a person to travel instantaneously to another location might also require that person's information to travel at the speed of light -- and that's a big no-no according to Einstein's theory of special relativity.

Also, for a person to teleport, the teleporter's computer would have to pinpoint and analyze all of the 1028 atoms that make up the human body. That's more than a trillion trillion atoms. This wonder machine would then have to send the information to another location, where another amazing machine would reconstruct the person's body with exact precision.

How much room for error would there be? Forget your fears of splicing DNA with a housefly, because if your molecules reconstituted even a millimeter out of place, you'd "arrive" at your destination with severe neurological or physiological damage.

And the definition of "arrive" would certainly be a point of contention. The transported individual wouldn't actually "arrive" anywhere. The whole process would work far more like a fax machine -- a duplicate of the person would emerge at the receiving end, but what would happen to the original? What do YOU do with your originals after each fax?

It stands to reason, then, that every successful bio-digital teleportation would be an act of murder and creation. Each use would see the digitalization of your body's every detail, the creation of a genetic clone complete with all the travelers' memories, emotions, hopes and dreams.

The original copy would have to die; that is, unless we're cool with the notion of duplicating ourselves every time we need to travel cross-country and committing infanticide each time little Jimmy heads to school.

As with all technologies, scientists will surely continue to improve upon the underlying concepts of teleportation. One day, such a harsh vision of life, death and teleportation may well seem barbaric and uninformed. Our ancestors may feel their bodies fade and dematerialize on one world, even as their eyes open on a planet untold light-years away.

Explore the links below to learn even more about quantum physics and teleportation.

Author's Note: How Teleportation Will Work

Teleportation is one of those "Frankenstein" technologies that terrify us even as they inspire us. Surely, the power to travel instantaneously from New York to Bangkok or from Earth to Alpha Centauri is certainly a power worth grasping after. It could ultimately guarantee the survival of the human race and its peripheral technologies could change fundamentally what it is to be human.

After all, if a machine can digitize everything that's you and rebuild it on the other side of the planet, then why bother with a perfect copy? How about an enhanced copy that's younger, smarter, stronger and happier? Why should you ever worry with getting old when you can simply pass through the teleporter and emerge renewed?

Bio-digital teleportation tempts and haunts us. It's why so many of our sci-fi visions of it involve inherent tragedy and dehumanizing horror. Because if we ever achieve it, we'll have mastered life, death, matter, space and time. Surely, some barrier should stand between humanity and such godhood, right? –- Robert Lamb