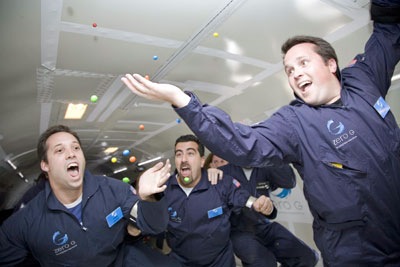 Eating small pieces of candy might be a problem if there was no gravity on Earth.
Photo courtesy of Zero Gravity Corporation

Gravity is one of those things we take completely for granted. And there are two things about it that we take for granted: the fact that it is always there, and the fact that it never changes. If the Earth's gravity were ever to change significantly, it would have a huge effect on nearly everything because so many things are designed around the current state of gravity.

Before looking at changes in gravity however, it is helpful to first understand what gravity is. Gravity is an attractive force between any two atoms. Let's say you take two golf balls and place them on a table. There will be an incredibly slight gravitational attraction between the atoms in those two golf balls. If you use two massive pieces of lead and some amazingly precise instruments, you can actually measure an infinitesimal attraction between them. It is only when you get an gigantic number of atoms together, as in the case of the planet Earth, that the force of gravitational attraction is significant.

Could we survive without gravity?

Without gravity, the water in oceans, rivers and lakes would disappear, leaving Earth with no water supply.
Photo courtesy USGS

But let's ignore the physics and imagine that, one day, the planet's gravity turned off, and suddenly there was no force of gravity on planet Earth. This would turn out to be a pretty bad day. We depend on gravity to hold so many things down -- cars, people, furniture, pencils and papers on your desk, and so on. Everything not stuck in place would suddenly have no reason to stay down, it would start floating. But it's not just furniture and the like that would start to float. Two of the more important things held on the ground by gravity are the atmosphere and the water in the oceans, lakes and rivers. Without gravity, the air in the atmosphere has no reason to hang around, and it would immediately leap into space. This is the problem the moon has -- the moon doesn't have enough gravity to keep an atmosphere around it, so it's in a near vacuum. Without an atmosphere, any living thing would die immediately and anything liquid would boil away into space.

In other words, no one would last long if the planet didn't have gravity.

If gravity were to suddenly double, It would be almost as bad, because everything would be twice as heavy. There would be big problems with anything structural. Houses, bridges, skyscrapers, table legs, support columns and so on are all sized for normal gravity. Most structures would collapse fairly quickly if you doubled the load on them. Trees and plants would have problems. Power lines would have problems. The air pressure would double and that would have a big effect on the weather.

What this answer shows you is just how integral gravity is to our world. We can’t live without it, and we can't afford to have it change. It is one of the true constants in our lives!