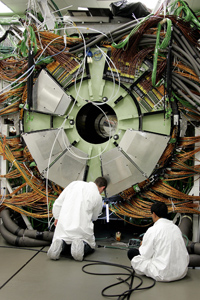 Technicians work on a solenoid magnet for use in the particle accelerator at the CERN laboratory in Switzerland. This accelerator could prove the existence of some of the theoretical particles Lisi used in his E8 model.
Fabrice Coffrini/AFP/Getty Images

Lisi's theory that E8 could be the answer to how gravity and the other forces work together does have some problems. Lisi himself explains that it's in the most infant of stages. "I'm the first to admit that it's a long shot," Lisi tells the magazine New Scientist.

One of the key hypotheses that may prove or disprove Lisi's theory of everything could actually be substantiated by 2008. Like Kaku's string theory, Lisi's method predicts and requires the existence of presently undiscovered matter. He has used theoretical particles to fill in the gaps left after he used all of the elementary particles. It's possible that the existence of these particles could be detected when the Large Hadron Collider, the most powerful particle accelerator in the world, is completed and put into use at CERN, a particle physics laboratory in Switzerland. The existence of these particles would go a long way toward showing that Lisi's idea may be the one that points the way to the theory of everything.

But there are other, more prickly problems with using the E8 as the basis for the theory of everything. Some physicists dismiss Lisi's method outright, simply because he used an expression of gravity in the same terms of as electromagnetism and strong and weak nuclear forces. The laws of physics state that, because it works on a macro, or cosmic scale, gravity simply doesn't exist in the manner that the other three forces do, since they work on a much smaller scale. These scientists insist that gravity isn't capable of being expressed in the same way as the other three forces. This has been the sticking point for many physicists in search of the theory of everything, and some find it dubious that Lisi has been able to accurately meld gravity and the other three on a mathematical level.

Lisi has also been criticized for adding values that, to this point, haven't been able to be added, specifically fermions and bosons. Fermions are particles that don't spin in whole integers (theirs are stated in fractions, such as 3/2), and bosons -- the force-carrying particles -- have spins stated in whole numbers, like 1 or 2. By adding these two particles together, Lisi has attracted the ire of some of his fellow physicists. One astrophysicist who wrote on Lisi's discovery said that adding bosons and fermions isn't even like adding apples and oranges, but more like adding an apple and a lightning bolt [source: Sigurdsson].

That doesn't mean Lisi's idea for overcoming the disparate nature of gravity and the other forces is wrong. It's important to remember that Lisi is not the first to try using E8 as a way of looking how the forces and particles in our universe interact. But he may be the person who has come upon a clever way which no one else has thought of, and uncovered the first glimpse at the basic function of the universe. But how can a symmetrical object be the theory of everything?

Lisi himself doesn't address this. If his idea proves correct, it could be that the E8 structure provides the infinitely small and unobservable framework for all matter and forces in the universe. It is also possible that the E8 is an image of what our universe as a whole looks like. But before investigation into what E8 represents, it must first be proven that the E8 is really what Lisi suspects it might be.

For more information on physics and related topics, visit the next page.