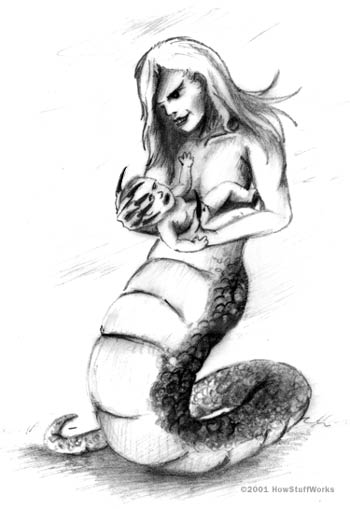 Like Lilith and Lamastu, Lamia is depicted as half woman, half animal. She has the torso of a woman and the lower body of a snake.

The ancient Greeks feared similar creatures, notably Lamia, a demoness with the head and torso of a woman and the lower body of a snake. In one version of the legend, Lamia was one of Zeus' mortal lovers. Filled with anger and jealousy, Zeus' wife, the goddess Hera, made Lamia insane so she would eat all her children. Once Lamia realized what she had done, she became so angry that she turned into an immortal monster, sucking the blood from young children out of jealousy for their mothers.

The Greeks also feared the empusai, the malicious daughters of Hecate, the goddess of witchcraft. The empusai, who could change form, came up from Hades (the underworld) at night as beautiful women. They would seduce shepherds in the field, and then devour them. A similar creature, the baobhan sith, shows up in Celtic folklore.

Vampire-like figures also have a long history in the mythology of Asia. Indian folklore describes a number of nightmarish characters, including rakshasa, gargoyle-like shape-shifters who preyed on children, and vetala, demons who would take possession of recently dead bodies to wreak havoc on the living. In Chinese folklore, corpses could sometimes rise from the grave and walk again. These k'uei were created when a person's p'o (lower spirit) did not pass onto the afterlife at death, usually because of bad deeds during life. The p'o, angered by its horrible fate, would reanimate the body and attack the living at night. One particularly vicious sort of k'uei, known as the Kuang-shi (or Chiang-shi), could fly and take different forms. The Kuang-shi was covered in white fur, had glowing red eyes and bit into its prey with sharp fangs.

Nomadic tribes and traveling traders spread different vampire legends throughout Asia, Europe and the Middle East. As these stories traveled, their various elements combined to form new vampire myths. In the past 1,000 years, vampire legends have been especially pervasive of eastern European contributions. In the next section, we'll look at these creatures, the direct predecessors of the modern vampire.