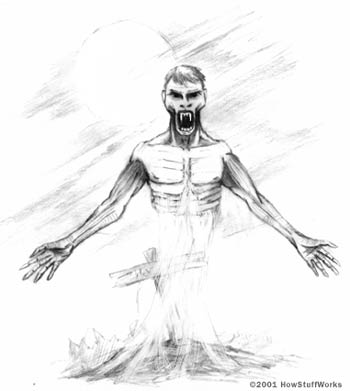 The strigo of eastern Europe: Strigoi, reanimated corpses that prey on the living, inspired much of the modern vampire legend.

The Dracula legend, and the modern vampire legend that came out of it, was directly inspired by the folklore of eastern Europe. History records dozens of mythical vampire figures in this region, going back hundreds of years. These vampires all have their particular habits and characteristics, but most fall into one of two general categories:

The most notable demon vampires were the Russian upir and the Greek vrykolakas. In these traditions, sinners, unbaptized babies and other people outside the Christian faith were more likely to be reanimated after death. Those who practiced witchcraft were particularly susceptible because they had already given their soul to the devil in life. Once the undead corpses rose from the grave, they would terrorize the community, feeding on the living.

By many accounts, these undead corpses were required to return to their grave regularly to rest. When townspeople believed that someone had become a vampire, they would exhume the corpse and try to get rid of the evil spirit. They might try an exorcism ritual, but more often they would destroy the body. This might entail cremation, decapitation or driving a wooden stake through the heart. Bodies might also be buried face down, so the undead corpses would dig deeper into the earth, rather than up into shallower ground. Some families secured stakes above the corpse so it would impale itself if it tried to escape.

The vampires in Moldavia, Wallachia and Transylvania (now Romania) were commonly called strigoi. Strigoi were almost exclusively human spirits who had returned from the dead. Unlike the upir or vrykolakas, the strigoi would pass through different stages after rising from the grave. Initially, a strigo might be an invisible poltergeist, tormenting its living family members by moving furniture and stealing food. After some time, it would become visible, looking just as the person did in life. Again, the strigo would return to its family, stealing cattle, begging for food and bringing disease. Strigoi would feed on humans, first their family members and then anyone else they happened to come across. In some accounts, the strigoi would suck their victims' blood directly from the heart.

Initially, a strigo needed to return to the grave regularly, just like an upir. If townspeople suspected someone had become a strigo, they would exhume the body and burn it, or run spikes through it. But after seven years, if a strigo was still around, it could live wherever it pleased. It was said that strigoi would travel to distant towns to begin new lives as ordinary people, and that these secret vampires would meet with each other in weekly gatherings.

In addition to undead strigoi, referred to as strigoi mort, people also feared living vampires, or strigoi viu. Strigoi viu were cursed living people who were doomed to become strigoi mort when they died. Babies born with abnormalities, such as a tail-like protrusion or a bit of fetal membrane tissue attached to the head (called a caul), were usually considered strigoi viu. If a strigoi mort living among humans had any children, the offspring were cursed to become undead strigoi in the afterlife. When a known strigoi viu died, the family would destroy its body to ensure that it would not rise from the grave.

In other parts of eastern Europe, strigoi-type creatures were known as vampir, or vampyr, most likely a variation on the Russian upir. Western European countries eventually picked up on this name, and "vampyr" (later "vampire") entered the English language.

In the 17th and 18th centuries, vampire hysteria spread through eastern Europe. People reported seeing their dead relatives walking around, attacking the living. Authorities dug up scores of graves, burning and staking the corpses. Word of the vampire scare spread to western Europe, leading to a slew of academic speculations on the creatures, as well as vampire poems and paintings. These works in turn inspired an Irishman named Bram Stoker to write his vampire novel, "Dracula." In the next section, we'll see how this work fits into the evolution of vampire lore.

In eastern European folklore, you could ward off a vampire by scattering seeds on the ground, either on top of the vampire's grave or outside your house. Vampires were said to be obsessive creatures, and they were compelled to count all the seeds. If you hid a nail in the seeds, it would prick the vampire midway through the count. The vampire would then drop the seeds and have to start all over again.