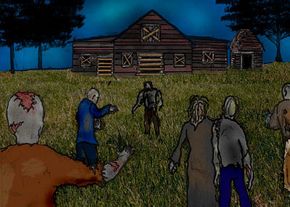 The concept of zombies is thought to have originated in Haiti.

It happens in just about every zombie movie -- a throng of reanimated corpses lumbers toward the farmhouse, shopping mall, pub or army base where the heroes have barricaded themselves. The zombies aren't dead, but they should be. They're relentless and oblivious to pain, and they continue to attack even after losing limbs. Usually, anyone the zombies kill returns as a zombie, so they quickly evolve from a nuisance to a plague.

Like a lot of monsters, zombies have their roots in folklore and -- according to some researchers -- in real events in Haiti. In this article, we'll discuss Haitian zombies, explore depictions of zombies in films and video games and review the best course of action for surviving an attack.

­Zombies are common in Haitian stories and folklore. Researchers studying Haitian culture have related countless tales of bodies brought back to life by bokor, or sorcerers. These zombies are mindless slaves. They are not self-aware and are not particularly dangerous unless fed salt, which restores their senses. These stories are widespread and similar to urban legends -- they prey on the listener's deepest fears and seem believable in spite of their improbability.

Even after documenting numerous stories and rumors, researchers found little solid evidence to explain or prove the phenomenon. Often, the alleged zombies had received little or no medical care before their apparent deaths. Researchers also had trouble ruling out mistaken identity and fraud.

In 1980, a man appeared in a rural Haitian village. He claimed to be Clairvius Narcisse, who had died in Albert Schweitzer Hospital in Deschapelles, Haiti on May 2, 1962. Narcisse described being conscious but paralyzed during his presumed death -- he had even seen the doctor cover his face with a sheet. Narcisse claimed that a bokor had resurrected him and made him a zombie.

Since the hospital had documented Narcisse's illness and death, scientists viewed him as a potential proof for Haitian zombies. Narcisse answered questions about his family and childhood that not even a close friend could have known. Eventually, his family and many outside observers agreed that he was a zombie returned to life.

Narcisse was the impetus for the Zombie Project -- a study into the origins of zombies conducted in Haiti between 1982 and 1984. During that time, ethnobotanist and anthropologist Dr. Wade Davis traveled through Haiti in the hopes of discovering what causes Haitian zombies.

Next, we'll look at what Davis discovered.

Davis traveled to Haiti at the request of Dr. Nathan S. Kline, who theorized that a drug was responsible for Narcisse's experiences as a zombie. Since such a drug could have medical uses, particularly in the field of anesthesiology, Kline hoped to gather samples, analyze them and determine how they worked.

Davis learned that Haitians who believed in zombies believed that a bokor's sorcery -- not a poison or a drug -- created them. According to local lore, a bokor captures a victim's ti bon ange, or the part of the soul directly connected to an individual, to create a zombie. But during his research, Davis discovered that the bokor used complex powders, made from dried and ground plants and animals, in their rituals.

In addition, the powders contained other plant and animal ingredients, like lizards and spiders, which would be likely to irritate the skin. Some even included ground glass.

The use of puffer fish intrigued Davis. Tetrodotoxin causes paralysis and death, and victims of tetrodotoxin poisoning often remain conscious until just before death. The paralysis prevents them from reacting to stimuli -- much like what Clairvius Narcisse described about his own death. Doctors have also documented cases in which people ingested tetrodotoxin and appeared dead but eventually made a complete recovery.

Davis theorized that the powder, applied topically, created irritation and breaks in the victim's skin. The tetrodotoxin could then pass into the bloodstream, paralyzing the victim and causing him to appear dead. The family would bury the victim, and the bokor would remove the body from the grave. If all had gone well, the poison would wear off and the victim would believe himself to be a zombie.

While Davis's theory is promising, it does have some holes. Next, we'll look at the controversy surrounding Davis's research.

There are several possible origins for the word "zombie." These include jumbie, the West Indian term for "ghost," and nzambi, the Kongo word meaning "spirit of a dead person."

At first glance, Davis's research seems promising. Tetrodotoxin definitely causes paralysis and death, and researchers have documented cases in which people have recovered from near-fatal tetrodotoxin poisoning. Some of the samples Davis brought back to the United States also produced dramatic results when applied to the shaved skin of rats and a rhesus monkey. The subjects became lethargic and then immobile, but they eventually recovered completely.

Other researchers, however, have raised questions about the legitimacy of Davis's research and the actual components of the samples he brought back from Haiti. Scientists have:

A lot of people view Davis's work as the only possible explanation for the Haitian zombie phenomenon. Others dismiss it as unscientific or even fraudulent. You can learn more about the controversies regarding Haitian zombies and Davis's research in the April 15, 1988 issue of the journal Science or the October 11, 1997 issue of The Lancet.

Haitian zombies have been the inspiration for movies, books and video games. Next, we'll look at portrayals of zombies in popular culture.

According to Davis's theories, a person poisoned with Haitian zombie powder regains consciousness either while in the coffin or shortly after being removed from it. But he explains that the bokor have a built-in safety net if the procedure doesn't work. Bokor say that divine intervention can prevent the reanimation of a zombie. They also say they can't create a zombie if the powder is too potent and kills too completely. 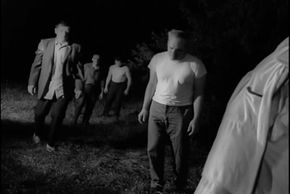 Many movies follow the example of "Night of the Living Dead" and portray zombies as far more dangerous in large groups.

Although zombies appeared in movies as early as 1919 [ref], many people credit George A. Romero with setting the standard for modern zombies. In the classic movie "Night of the Living Dead," Romero portrayed zombies as slow-moving, flesh-eating corpses, reanimated by radiation from a satellite returning from Venus. The radiation affected the recent, unburied dead, and the resulting zombies were invulnerable until someone destroyed their brains or separated their heads from their bodies. In "Night of the Living Dead," zombies were neither intelligent nor self-aware. They had a very limited use of tools, mostly confined to using blunt objects as cudgels. In Romero's later work, zombies became somewhat capable of thought, and in some cases self-aware. They still generally moved slowly and had minimal intelligence.

Many movies and video games have used Romero's concept of zombies. For the most part, zombies are:

In some portrayals, zombism is contagious, and people bitten by zombies become zombies themselves. In others, people die from the bite and are reanimated by the same force that created the other zombies. In general, this continual spread of zombies leads to a zombie plague in which the undead vastly outnumber living humans.

Some recent zombie movies, like "Shaun of the Dead," adhere faithfully to the Romero zombie conventions and make frequent references to his work. Others depict faster, more intelligent zombies. Films like "28 Days Later" keep the basic structure of a zombie film but do not portray actual zombies. (In "28 Days Later," people are infected with a virus that takes effect in seconds -- they don't actually die until they eventually starve.) A few recent movies and games throw all these conventions aside, presenting zombies that move quickly and can think for themselves, much to the chagrin of zombie purists.

Next, we'll review how to defend yourself from a zombie attack.

Zombies are undead, but not all undead are zombies, and a resurrected corpse does not always a zombie make. For example, Frankensteinian monsters, assembled from various body parts, are not zombies because they are usually intelligent and self-aware. Mummies can bear a striking resemblance to zombies, even down to the guttural speech and shambling walk. Their deliberate physical preservation, however, sets them apart from ordinary zombies. The infected people in "28 Days Later" also are not zombies because they do not die before taking on a zombie-like (though fast-moving) appearance and fixation on killing. 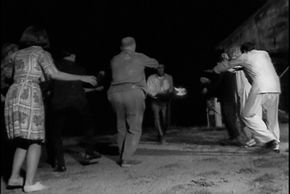 An important rule of zombie survival: Don't get surrounded. From "Night of the Living Dead."

Whether featuring traditional, shambling zombies or a newer, smarter breed, most movies and games agree on how to survive a zombie attack:

Follow the links below for lots more information about Haiti, voodoo, zombies and related topics.

Movies like "Return of the Living Dead" have popularized the idea that zombies eat people's brains. This makes little logical sense, since brains are relatively small and are more protected than any other organ in the human body. However, some sources explain that zombies only devour the brains of the living when their zombie masters order them to. 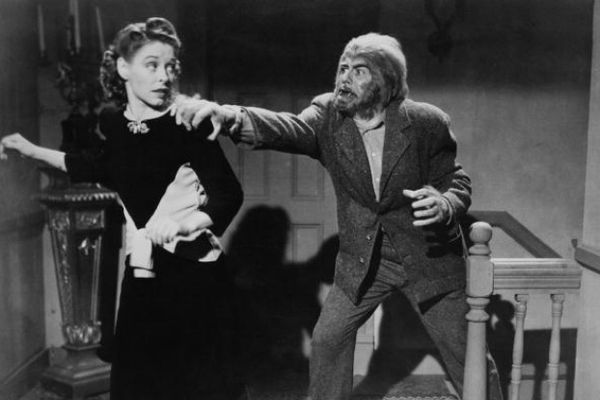 Up Next
How Werewolves Work
Explore More 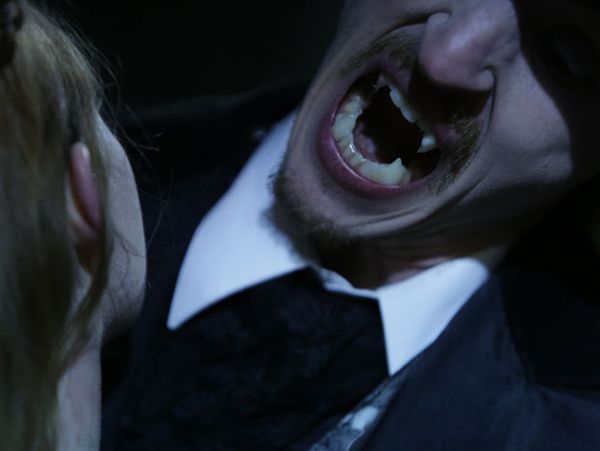 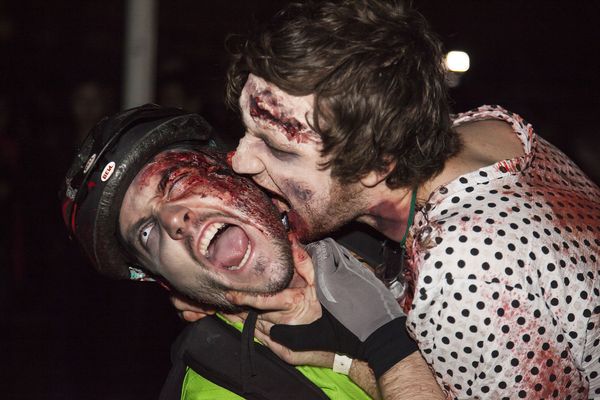