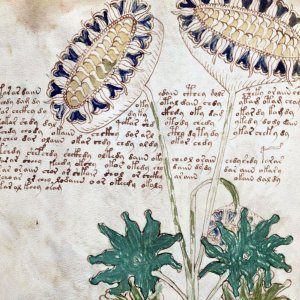 Will we ever unravel the true meaning of the Voynich manuscript? Do we really want to?
© Universal History Archive/UIG via Getty images

When Wilfrid Voynich began soliciting help in decoding his mysterious book, he probably never imagined that the text would withstand 100 years of intense scrutiny by modern scientists and codebreakers.

A huge proportion of would-be codebreakers believe that the script is a cipher, and that the characters correspond to a known language. For decades, many people have applied various means to crack this code, believing that if they could construct a legend of sorts, they'd be able to decode the entire book. Notably, one of the first men to inspect the document in the 20th century took a decidedly different approach.

In 1921, Voynich lent the document to William Newbold, a philosopher at the University of Pennsylvania. Newbold decided that the text itself was meaningless, but that tiny patterns in the ink itself were a sort of microscopic shorthand that contained the book's real message. In reality, those patterns appeared randomly as the ink dried, and Newbold's ideas are these days considered about as weird as the book itself.

One of the first major collaborative efforts to decode the Voynich gathered steam as World War II wound down. Cryptologist William Friedman gained fame for decrypting Japanese messages during the war and also helped build the National Security Agency. He and a team of crack analysts came together with the intention of solving the book's puzzles. About 30 years later Friedman surrendered, deeming the book impossible to understand.

Since then, scientists of every discipline have applied their knowledge to the manuscript. None of them has made any obvious headway.

The book's impenetrability is also its allure. In the age of the Internet, when hundreds of millions of people are able to access the pages with just a few mouse clicks, researchers hold out hope that perhaps the hive mind of the Web will break down the manuscript's secrets. Maybe in joining our collective human knowledge, enough people will put together enough clues to decode the text.

In the meantime, there are oodles of people online who claim to have unraveled the book's code. They back up their theories with long-winded (and occasionally readable) explanations for how to read the text. To date, none of them has actually succeeded.

Then of course, there's always the question of whether we really want anyone to finally break the book's code. Doing so would be mean the end of this bizarre, centuries-old puzzle, and it would be the final chapter, so to speak, of the manuscript's hold on our popular imagination. Without the mystery, it's just another old tome, interesting and artful to be sure, but not a text that's protected by some lost language or impenetrable code. Maybe the Voynich should stay as it is, unsolved and full of riddles that will bend our minds for the rest of time.

Personally, I love mysteries ... for a while. Eventually, though, they start to drive me more than a little crazy. Is there intelligent life beyond Earth? Is Elvis really dead? Will anyone ever be able to read the Voynich manuscript? There's a good chance we'll never answer any of those questions in my lifetime. And when it comes to the Voynich, I take comfort in the fact that even if it is decoded, it likely doesn't hold any universe-altering information. Or at least, that's how I comfort myself knowing that I'll never have the answers.