What if Earth's core cooled down? 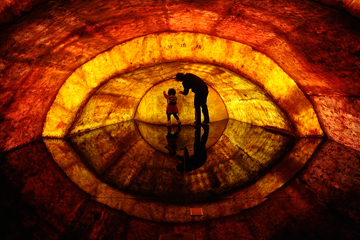 This is a model of Earth's core at China's Nanjing Geological Museum. It's probably pretty temperate in this model, but a cooling of the actual core could wreak havoc on the planet's magnetic field.
© Sean Yong/Reuters/Corbis

At its core, our planet is a piping hot place. Sure, it may not seem that way on a cold, dark morning in the dead of winter, but far below Earth's surface lies a scorching center made almost completely of metal. The outer core is an iron-and-nickel alloy that serves as a buffer between the inner core and Earth's mantle, a layer of magma and molten rock. The inner core is a solid, iron-rich ball that's about 750 miles (1,207 kilometers) thick. It's also the planet's hottest spot, with temperatures as high as 11,000 degrees Fahrenheit (6,093 degrees Celsius) [sources: National Geographic, Schultz].

With all the talk these days about the harmful effects of global warming, you might assume that Earth's core could stand to chill out a bit. In truth, we need the planet's center to remain blistering hot so that it can protect Earth from potentially harmful solar winds and debris.

Earth's core is about as toasty as the surface of the sun. It's been that way since, oh, about 4.5 billion years ago. That's when the planet first formed from a cloud of gases and particles. Gravity caused iron and other heavy substances to sink toward the middle of Earth, while lighter material like air and water rose to the crust. The stuff in the middle is so hefty that the outer core's gravity is about three times that of Earth's surface. It still maintains some of its original heat, as well as that created by gravitational friction from the movement of heavier materials closer to the center. The inner core continues to grow by about a centimeter every thousand years, gaining more heat as it expands. Decaying radioactive isotopes also add heat to the mix as they radiate from the planet's mantle [sources: National Geographic, Anuta].

If the core were to cool completely, the planet would grow cold and dead. It also would get a little dark: Power utilities pull radiant heat from Earth's crust and use it to heat water, the steam from which powers turbines to create electricity [source: Anuta].

Cooling also could cost us the magnetic shield around the planet created by heat from the core. This shield protects Earth from cosmic radiation. The shield is created by a convection process caused by constantly moving iron. Like the planet itself, Earth's core is constantly spinning – some scientists think it's moving even faster than the rest of the planet. The friction converts kinetic energy into electrical and magnetic energy that forms the field, which deflects harmful, charged particles emanating from the sun toward the north and south poles [sources: Folger, USGS].

Just how much losing the magnetic field would change life on Earth isn't clear. Some say the planet could see an onslaught of radioactive waves that would overheat the planet and make it uninhabitable. Others point to a possible uptick in solar rays that are believed to cause cancer. Still more observers say we could experience sweeping solar winds, perhaps as strong as those that may have swept all of the oceans, lakes and rivers from Mars and Venus. It's safe to say we're better off not finding out exactly what losing the magnetic field would mean [source: Schirber].

How the Uncanny Valley Works
Can your hair turn white overnight?
How Ouija Boards Work