What if everyone on Earth jumped at the same time? 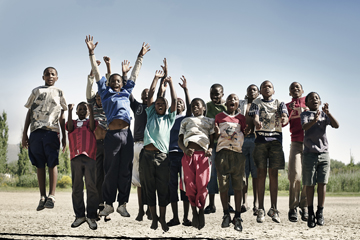 Everyone on Earth jumping at the same time is pretty improbable (and the effect would be pretty insignificant).
Peter Beavis/Getty Images

Ready ... set ... jump! It's hard to imagine getting everyone on Earth to jump at the same time — though with Facebook, Meetup and all manner of other social-media methods of reaching people, it's easier to believe in the possibility than it used to be. Still, 7.2 billion — that's how many people live on this rock — is a lot of folks to get to do anything at the same time [source: Census]. Talk about herding cats. But for the sake of argument, let's just say that we could actually get everyone to participate.

If everyone stood right where they are at the appointed time and jumped, nothing much would happen. The mass of people, while pretty large, is nowhere near as large as the mass of the Earth, especially if we're all spread out like that [source: Keyser].

But since we're what-iffing here, what if we could get all the people on Earth into one spot to jump at the same time? If the more than 7 billion humans stood jammed up against each other, we'd fill about 500 square miles (805 square kilometers), or a city the size of Los Angeles [source: Gupton]. Now, even assuming we could all stand that close and still manage to jump all at once, again, nothing much would happen.

Disappointing, huh? The mass of that many people may seem pretty big to all of us, but compared to the mass of the Earth, it would be like the Whos in Dr. Seuss's "Horton Hears a Who" — tiny creatures on a speck of dust. In fact, if we all jumped together, we would move the Earth only a tiny bit (as in, less than the width of a hydrogen atom) as we took off. Then as we all landed again, returning to our same spot, the Earth would do the same — return to the same spot it would have been in had we not jumped at all [source: Keyser].

So, what would it take to move the Earth? Well, in fact, this is a question scientists have asked because the sun is heating up. It's estimated that in about 1.1 billion years, the sun will get so hot that it will warm the Earth's temperature by 120 degrees Fahrenheit (50 degrees Celsius), making it impossible for life as we know it to survive [source: Hecht].

In looking at this eventuality, some have studied how to move the Earth just a bit farther from the growing fireball. Here in the early 21st century, that technology doesn't exist — and it may not ever. Consider this: Just to change the Earth's velocity by 20 nanometers per second (an infinitesimal amount, when you consider that a human hair is 80,000 to 100,000 nanometers wide), you'd have to launch 1 billion 11 ton (10-tonne) rockets at the same time in the same direction — talk about a fireball! [sources: Nano, Hecht]

So if you want, go ahead and gather all of your friends together to jump up and down and see if you can make the Earth shake. It'll be great exercise — but don't expect it to move mountains.

Are Chewbacca and Bigfoot Related?
What if the Earth had two moons?
Is Chicago the windiest city in the U.S.?