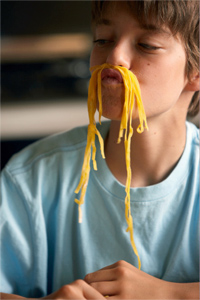 Yeah, spaghetti is all fun and games until you're the spaghetti.
Ableimages/Lifesize/Thinkstock

Here's where it starts to get bad. Tidal forces -- so named because similar gravitational forces between the moon and the Earth cause ocean tides -- increase dramatically as the distance between you and the black hole shrinks. This means the gravity acting on your feet is much stronger than the gravity acting on your head. As a result, your feet begin to accelerate much faster than your head. Your body stretches out, not uncomfortably at first, but over time, the stretching will become more severe. Astronomers call this spaghettification because the intense gravitational field pulls you into a long, thin piece of spaghetti.

When you start feeling pain depends on the size of the black hole. If you're falling into a supermassive black hole, you'll begin to notice the tidal forces within about 600,000 kilometers (372,822 miles) of the center -- after you've already crossed the event horizon [source: Bunn]. If you're falling into a stellar black hole, you'll start feeling uncomfortable within 6,000 kilometers (3,728 miles) of the center, long before you cross the horizon [source: Bunn].

Either way, spaghettification leads to a painful conclusion. When the tidal forces exceed the elastic limits of your body, you'll snap apart at the weakest point, probably just above the hips. You'll see your lower half floating next to you, and you'll see it begin to stretch anew as tidal forces latch onto it. The same thing happens to your torso, of course, until each half snaps a second time. In a matter of seconds, you're a goner, reduced to a string of disconnected atoms that march into the black hole's singularity like ants disappearing into a colony.

It's not a great way to die, but there's one consolation: In space, no one can hear you scream.