How Self-healing Spacecraft Will Work

Browse the article How Self-healing Spacecraft Will Work 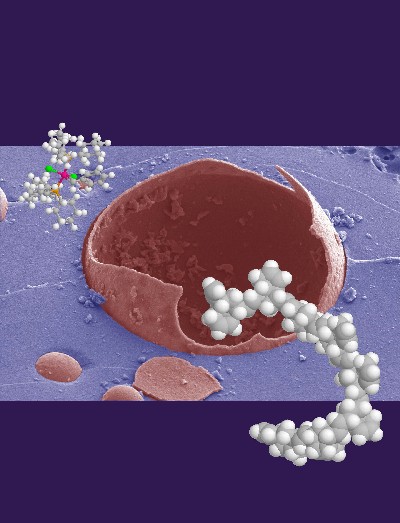 A newly-developed material embedded with microencapsulated healing agents will heal itself when tiny cracks form.
Photo courtesy University of Illinois

When you cut yourself, it's amazing to watch how quickly your body acts to mend the wound. Immediately, your body works to pull the skin around the cut back together. If you have a scar, you can see the evidence of our bodies' self-healing power. Scientists are now developing a new type of composite material that will give those same self-healing qualities to spacecraft.

If humans plan to travel far into space and to interstellar planets, new advanced materials will be needed for spacecraft construction. One weakness of current composite materials is that they tend to form tiny hairline cracks, which will cause major damage over time. In February 2001, researchers at University of Illinois at Urbana Champaign announced that they have developed a new synthetic material that will heal itself when cracked or broken.

This new smart material and other technologies like it could be the first step in building a spacecraft capable of traveling millions of miles from Earth, where repairs won't be easy to make. In this edition of How Stuff WILL Work, you will learn about this new self-healing composite and electronics system that analyzes and fixes itself before problems become too great. 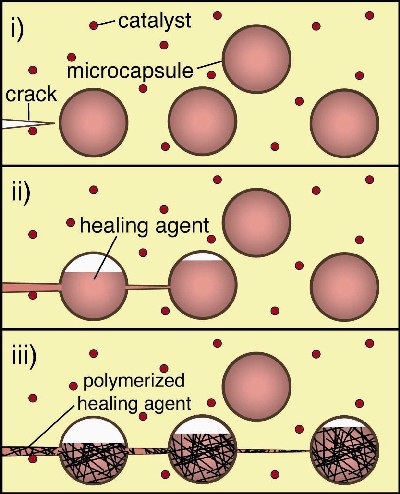 In this graphic you can see how the crack ruptures the microcapsules filled with a healing agent, which contacts the catalyst to bond the crack closed.
Photo courtesy University of Illinois

Damage to a spaceship's hull often begins as tiny surface cracks, which are invisible to the eye. These micro-thin cracks can also form underneath the surface of the material, where they are hidden from sight. Once these cracks form, they will grow until the material weakens and breaks. In order to prevent these tiny cracks from spreading, a new material has been developed that will sense damage and mend itself instantly. This self-healing ability could significantly prolong the life of the spacecraft.

There are three parts to this new self-healing material:

When a microcrack forms in the composite material, it will spread through the material. By doing so, this crack will rupture the microcapsules and release the healing agent. This healing agent will flow down through the crack and will inevitably come into contact with the Grubbs' catalyst, which initiates the polymerization process. This process will eventually bond the crack closed. In tests, the self-healed composite material regained as much as 75 percent of its original strength.

The market for this kind of self-healing material goes far beyond spacecraft. Approximately 20 million tons of composite material is used every year for engineering, defense projects, offshore oil exploration, electronics and biomedicine. This self-healing material will show up in many everyday items, including polymer composite circuit boards, artificial joints, bridge supports and tennis rackets.

In the next 20 years, a new industry called nanotechnology will cause significant changes in our lives. Nanotechnology involves creating very tiny machines or robots no larger than a few nanometers. A nanometer is just a billionth of a meter. These nanomachines will be able to manipulate atoms and fabricate materials at the atomic level. Because they can self-replicate, these tiny machines will make production of almost any product very cheap.

One of the products of nanotechnology might be nanomachines that can be released to repair materials by sucking in surrounding molecules to repair a crack. If a crack formed in a spacecraft's composite shell, nanorobots could be released to gather molecules around the spacecraft to repair the crack.

Before nanotechnology can take off, scientists must learn how to manipulate atoms. The next challenge will be to program these nanomachines to perform specific tasks. For more information, read How Nanotechnology Will Work.

During long space missions, maintaining the health of onboard computers and electronics systems will be just as important as maintaining the exterior shell. NASA is working on a new type of system that will give self-repairing capabilities to the internal wiring of the spacecraft. This new evolvable hardware will be able to monitor the electronics and correct systems before malfunctions become a crucial problem.

Initially, a self-repairing flight system would be used in airplanes before being moved to spacecraft. At the NASA Aviation Safety Program, based at the Langley Research Center, researchers are working on this kind of self-healing computer system. In 1999, the United States space agency reported that it could have commercial systems available by 2004. The idea here is to create a self-healing computer system that uses a cluster of low-power processors that are loosely coupled to spacecraft systems via wireless links.

These health management and control upset management systems could detect, diagnose and prevent abnormalities before problems become uncorrectable. The computerized health management system will monitor vital functions, help prevent and reduce any malfunctions, enhance a flight crew's ability to respond to problems and reduce a pilot's workload during an emergency. Control upset management would include advanced detection and prediction algorithms, display formats, pilot cueing and guidance and control methods to prevent accidents when failures occur. Both of these systems could work for aircraft and spacecraft.

In the future, spacecraft could possibly take us to the edge of our solar system and beyond. If that is to be possible, we will need spacecraft with built-in safeguards. These smart-spacecraft will have to be able to sense and react to potential problems that might go unseen by their human passengers.