Space Races for the 21st Century

Upon directives from President George W. Bush, NASA has re-examined its goals for future spaceflight.  The space shuttle will be retired by 2010.  A new spacecraft, the Orion Crew Exploration Vehicle is being designed to return Americans to the Moon.

Specifically, NASA is directing its efforts to the following goals:

However, NASA is not alone in this goal.  Other nations besides the United States and Russia have entered space. 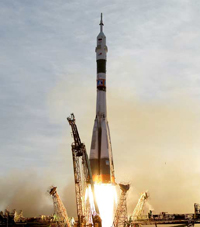 Photo courtesy NASA
The Soyuz TMA-5 spacecraft blasts off from the Baikonur Cosmodrome in Kazakhstan on Oct. 14, 2004.
On October 15, 2003, China placed its first taikonaut, Lt. Col.Yang Liwei, into space aboard the Shenzhou 5 spacecraft. Lt. Col.Yang spent over 21 hours in Earth’s orbit and landed on October 16, 2003.  To date, three taikonauts have flown in two Shenzhou flights.  More are planned and China has announced its intentions to send men to the Moon.  Despite China’s intentions and the U.S.’ goals, this situation is not the same as the original space race between the United States and the Soviet Union.  For one thing, the American public is not as engaged or interested in space exploration as it was in the 1960’s and early 1970’s.

Besides governments, there’s a growing space race among private companies to be the first to establish sub-orbital and orbital spaceflights for space tourism. This race began with the Ansari X-prize, which was subsequently won by Scaled Composite’s SpaceShipOne (see How SpaceshipOne Works).  The success of SpaceShipOne is being developed into a commercial venture called Virgin Galactic by Sir Richard Branson.

In this same spirit, the X-Prize foundation and Google have sponsored the Google Lunar X Prize, a $30 million competition for the first privately funded team to send a robot to the moon, travel 500 meters, and transmit video, images and data back to the Earth.

Such competitions and races as the original space race have brought about new technologies and products such as Mylar and GPS systems. They’ve developed new spacecraft like SpaceShipOne. And competitions between countries for national pride and between companies for profitable markets will provide incentives for the development of new space technologies and lay the foundations for the future of space exploration.

For more information on the space race, space in general and related topics, shoot over to the next page to see more links. Related HowStuffWorks Articles