What a Space Suit Does 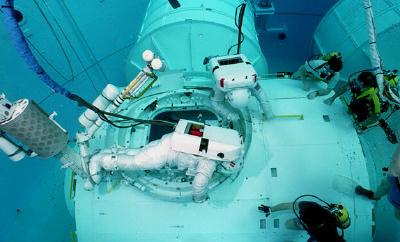 By creating an Earth-like environment within the suit itself, space suits allow humans to walk around in space in relative safety. Space suits provide:

The space suit provides air pressure to keep the fluids in your body in a liquid state -- in other words, to prevent your bodily fluids from boiling. Like a tire, a space suit is essentially an inflated balloon that is restricted by some rubberized fabric, in this case, Neoprene-coated fibers. The restriction placed on the "balloon" portion of the suit supplies air pressure on the astronaut inside, like blowing up a balloon inside a cardboard tube.

Most space suits operate at pressures below normal atmospheric pressure (14.7 lb/in2, or 1 atm); the space shuttle cabin also operates at normal atmospheric pressure. The space suit used by shuttle astronauts operates at 4.3 lb/in2, or 0.29 atm. Therefore, the cabin pressure of either the shuttle itself or an airlock must be reduced before an astronaut gets suited up for a spacewalk. A spacewalking astronaut runs the risk of getting the bends because of the changes in pressure between the space suit and the shuttle cabin.

Space suits cannot use normal air -- 78 percent nitrogen, 21 percent oxygen and 1 percent other gases -- because the low pressure would cause dangerously low oxygen concentrations in the lungs and blood, much like climbing Mt. Everest does. So, most space suits provide a pure oxygen atmosphere for breathing. Space suits get the oxygen either from a spacecraft via an umbilical cord or from a backpack life support system that the astronaut wears.

Both the shuttle and the International Space Station have normal air mixtures that mimic our atmosphere. Therefore, to go into a pure oxygen space suit, a spacewalking astronaut must "pre-breathe" pure oxygen for some period of time before suiting up. This pre-breathing of pure oxygen eliminates the nitrogen from the astronaut's blood and tissues, thereby minimizing the risk of the bends.

To cope with the extremes of temperature, most space suits are heavily insulated with layers of fabric (Neoprene, Gore-Tex, Dacron) and covered with reflective outer layers (Mylar or white fabric) to reflect sunlight. The astronaut produces heat from his/her body, especially when doing strenuous activities. If this heat is not removed, the sweat produced by the astronaut will fog up the helmet and cause the astronaut to become severely dehydrated; astronaut Eugene Cernan lost several pounds during his spacewalk on Gemini 9. To remove this excess heat, space suits have used either fans/heat exchangers to blow cool air, as in the Mercury and Gemini programs, or water-cooled garments, which have been used from the Apollo program to the present.

To protect the astronauts from collisions with micrometeroids, space suits have multiple layers of durable fabrics such as Dacron or Kevlar. These layers also prevent the suit from tearing on exposed surfaces of the spacecraft or a planet or moon.

Space suits offer only limited protection from radiation. Some protection is offered by the reflective coatings of Mylar that are built into the suits, but a space suit would not offer much protection from a solar flare. So, spacewalks are planned during periods of low solar activity.

Space suits have helmets that are made of clear plastic or durable polycarbonate. Most helmets have coverings to reflect sunlight, and tinted visors to reduce glare, much like sunglasses. Also, prior to a spacewalk, the inside faceplates of the helmet are sprayed with an anti-fog compound. Finally, modern space suit helmet coverings have mounted lights so that the astronauts can see into the shadows.

Mobility Within the Space suit

Moving within an inflated space suit is tough. Imagine trying to move your fingers in a rubber glove blown up with air; it doesn't give very much. To help this problem, space suits are equipped with special joints or tapers in the fabric to help the astronauts bend their hands, arms, legs, knees and ankles.

Mobility in the Spacecraft

In weightlessness, it is difficult to move around. If you push on something, you fly off in the opposite direction (Newton's third law of motion -- for every action there is an equal and opposite reaction). Gemini spacewalking astronauts reported great problems with just maintaining their positions; when they tried to turn a wrench, they spun in the opposite direction. Therefore, spacecraft are equipped with footholds and hand restraints to help astronauts work in microgravity. In addition, before the mission, astronauts practice spacewalking in big water tanks on Earth. The buoyancy of an inflated space suit in water simulates microgravity.

NASA has also developed some gas-powered rocket maneuvering devices to allow astronauts to move freely in space without being tethered to the spacecraft. One such device, which was called the Manned Maneuvering Unit (MMU), was basically a gas-thruster powered chair with a joystick control. NASA has also developed a nitrogen-gas propelled unit that fits on the backpack, called the Simplified Aid for Extravehicular Activity Rescue (SAFER). The SAFER can help an astronaut return to the shuttle or station in the event that he/she gets separated from the spacecraft. The SAFER holds 3.1 lb (1.4 kg) of nitrogen propellant and can change an astronaut's velocity by a maximum of about 9 feet/second (3 meters/second).