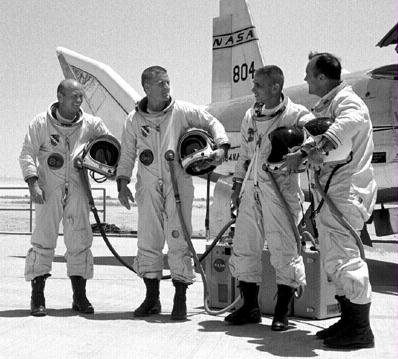 When jet aircraft were developed, pilots needed pressurized flight suits to cope with the low atmospheric pressure and lack of oxygen at high altitudes. Most of these suits were designed to be used only when the pressurized cabin failed. The suits consisted of neoprene rubber-coated fabric that could inflate like a balloon, and a more rigid fabric over the neoprene to restrain the suit and direct the pressure inward on the pilot. Hoses were attached from the plane to the suit to provide oxygen.

When NASA's Mercury program started, the space suits kept the designs of the early pressurized flight suits, but added layers of aluminized Mylar over the neoprene rubber.

The Mercury space suit also had laced boots, a helmet that attached via a collar ring, and gloves. The suit was cooled with an external fan unit that the astronaut carried. The astronaut received oxygen from the spacecraft via hoses connected to the suit. Again, the suit was only pressurized in the event that the cabin pressure failed.

Astronauts found it difficult to move in the Mercury space suit when it was pressurized; the suit itself was not designed for spacewalking. However, when NASA's Gemini program began, space suits had to be designed not only for emergency use, but also for spacewalking, so some changes had to be made.

To cope with the space environment, the Gemini space suit had a human-shaped neoprene rubber bladder that was constrained by netting. Over the bladder, the suit had layers of Teflon-coated nylon to protect the wearer from micrometeoroids. The spacecraft supplied the oxygen and air-cooling through an umbilical cord (shown in the photo above). After the Gemini program, astronauts learned that cooling with air did not work very well. Often, the astronauts were overheated and exhausted from spacewalking; and their helmets often fogged up on the inside from excessive moisture. In the following section, we'll talk about the changes that were made to the space suit design for the Apollo.