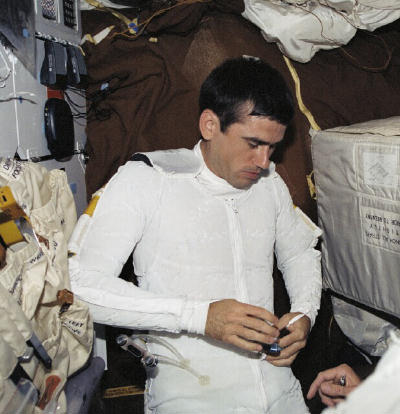 Astronaut in LCVG preparing for a spacewalk
Photo courtesy NASA

While early space suits were made entirely of soft fabrics, today's Extravehicular Mobility Unit (EMU) has a combination of soft and hard components to provide support, mobility and comfort. The suit itself has 13 layers of material, including an inner cooling garment (two layers), pressure garment (two layers), thermal micrometeoroid garment (eight layers) and outer cover (one layer). The materials used include:

All of the layers are sewn and cemented together to form the suit. In contrast to early space suits, which were individually tailored for each astronaut, the EMU has component pieces of varying sizes that can be put together to fit any given astronaut.

The EMU consists of the following parts:

LCVG is a set of Nylon tricot and spandex "long underwear" that is laced with thin plastic tubes. Cool water flows through these tubes to remove the heat produced by the astronaut. The cooling water comes from the space suit's backpack unit or from the spacecraft through an umbilical cord (used in the airlock while preparing for the spacewalk).

The CCA is a fabric cap worn by the astronaut. It contains microphones and speakers for use with the radio. It allows hands-free radio communications within the suit.

The LTA is a one-piece unit that contains the lower half of the EMU, including pants, knee and ankle joints, boots and lower waist. It is fitted to the upper half of the EMU by a metal connect ring. The LTA has loops to tether tools so that they do not float away in space.