Putting on a Spacesuit 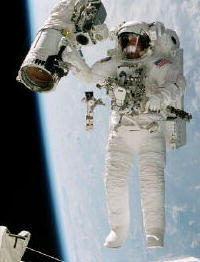 An astronaut on a space walk.
Photo courtesy NASA

To prepare for a spacewalk, crewmembers must do the following:

No leaks mean the airlock is depressurized. Once these steps are completed:

And the spacewalk begins. At this point, the EMU is a spacecraft in and of itself, independent of the shuttle/space station. This is why each EMU has a $12 million price tag. After the spacewalk, these steps are reversed to get out of the suit and back into the spacecraft.

When working on the moon, Apollo astronauts had difficulties moving around in their space suits. The Apollo suits were not nearly as flexible as the EMU used today; however, the EMU weighs almost twice as much as the Apollo suit (not a problem because the EMU was designed for work in microgravity, not on a planet's surface). For future space missions to Mars, NASA is developing "hard suits" that are more flexible, more durable, lighter-weight and easier to don than current space suits.

For more information on space suits and related topics, check out the links below.