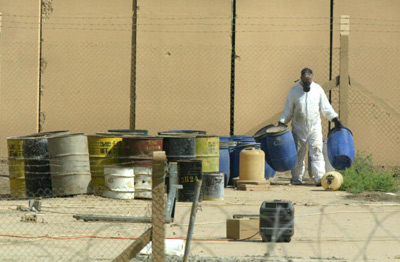 A UN International Atomic Energy Agency (IAEA) scientist carries barrels at the Tuwaitha nuclear plant, near Baghdad, where a team of seven is making an inventory of the nuclear material which was under its safeguard at the site before ­the war.
Ramzi Haidar/AFP/Getty Images

Ever since the bombings of Hiroshima and Nagasaki and the following nuclear arms race, the safety and security of nuclear weapons continues to intrigue us. The idea of anyone stealing dangerous weapons and unleashing them on targets has made its way into countless suspense novels, movies and television shows. The plot is familiar -- the bad guy steals the nuclear bomb, and it's the hero's job to catch the thief and defuse the bomb. More than one season of the popular television program "24" has focused on stolen nuclear material. We see it all the time in popular culture, but how easy is it in the real world for someone to steal a nuclear weapon?

When the Cold War between the United States and Russia ­ended in the early nineties, the threat of nuclear disaster appeared to fade. The events of Sept. 11, 2001, changed this -- when a group of terrorists hijacked four planes and destroyed the World Trade Center in New York City with two of them, fears increased over the possibility of stolen nuclear material being used in a future attack.

Intelligence shows that these fears aren't quite unfounded. Authorities in Russia, a country with a large arsenal of nuclear weapons and material used for building bombs, have reported hundreds of attempted smuggling incidents since September 2001. U.S. authorities and the CIA have acknowledged uncovering terrorists plots to obtain nuclear information.

How serious are these attempts to steal nuclear material? Could someone steal an entire nuke, or ­is it easier to steal different parts and assemble a bomb? What about missing weapons? Should we just be worried about bombs, or are there other kinds of weapons someone could use? In this article, we'll look at how safe the world's nuclear weapons arsenal is and see how close it is to the movies.

Pakistani spectators watch the Shaheen II long-range missile, capable of carrying a nuclear warhead on its launcher, during the National Day parade in Islamabad on March 23, 2005.
Farooq Naeem/AFP/Getty Images

It's possible that someone could steal an entire nuclear bomb, but not very likely. As you can see in this article, intact nuclear weapons aren't something you just shove into your pocket or roll down the street. They're big and easily recognizable, so security at a nuclear arms stockpile would have to be extremely foolish and lax to let a bomb through.

The more likely scenario would involve a person or several persons stealing the different parts necessary for a bomb and putting them together to make a functional device. With the right information and materials, bombs of varying effectiveness can be built. A recent security breach in November 2006 at the Los Alamos National Laboratory, for instance, has officials worried that an employee passed on information concerning special access controls that would detonate a bomb. It's not a whole device, but it's an important piece of the puzzle [source: CBS News].

The most important element a terrorist would need would be the main ingredient to a nuclear bomb: highly enriched uranium (HEU) or plutonium (or both). Like an intact nuclear bomb, however, these two substances aren't something you can just shoplift. Neither HEU nor plutonium exists naturally in nature, and they're very expensive and difficult to produce. However, both the United States and Russia have held onto enormous amounts of plutonium from dismantled atomic weapons, and both countries have "excess" amounts of HEU. These massive amounts of nuclear material are used or planned for use in nuclear power plants or research centers, making the risk of stolen information or material greater if proper security isn't enforced.

U.S. soldiers stand guard over a shipment of uranium as it's unloaded at Forth Smith in Canada.
Hulton Archive/Getty Images

In order to get an amount of plutonium or uranium to a supercritical mass -- the point at which the material is compressed enough to create an uncontrolled nuclear reaction -- a certain amount of conventional explosives like TNT is needed. Acquiring TNT and its detonation device would probably be the easiest part of building a nuclear bomb. Building or manufacturing a metal case for the bomb's insides would be the last major basic step.

Although on some level it's possible for all of these steps and many more complicated ones to fall through, someone with the intent to acquire a bomb or parts of a bomb would need to be extremely powerful, knowledgeable and skilled to pull off such a stunt. It would also be impossible to do alone, as a team of technicians would be necessary for putting everything together. They may make it look easy in the movies, but in reality,­ it's much more difficult (and not something we recommend trying).

For more on security and the alternatives to a complete nuclear bomb, read the next page. 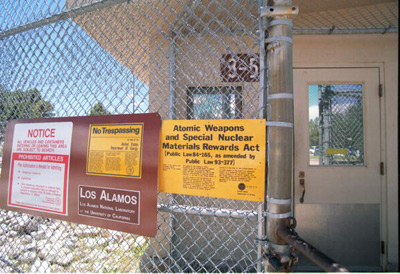 Why is the LHC 27 kilometers in circumference?
Why Are Air-dried Towels So Stiff?
How Did Benjamin Gompertz Predict Our Deaths?