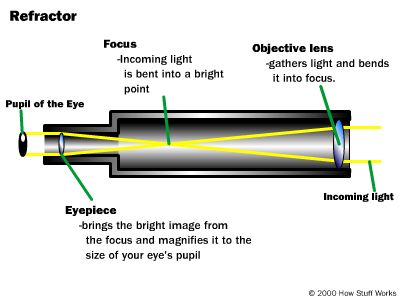 This is the simplest telescope design you could have. A big lens gathers the light and directs it to a focal point and a small lens brings the image to your eye.
© 2000 HowStuffWorks

­­­A telescope is an amazing device that has the ability­ to make faraway objects appear much closer. Telescopes­ come in all shapes and sizes, from a little plastic tube you buy at a toy store for $2, to the Hubble Space Telescope, which weighs several tons. Amateur telescopes fit somewhere in between, and even though they are not nearly as powerful as the Hubble, they can do some incredible things. For example, a small 6-inch (15-centimeter) scope lets you read the writing on a dime from 150 feet (46 meters) away!

Most of the telescopes you see today come in one of two flavors:

Both types accomplish exactly the same thing, but in completely different ways.

­To understand how telescopes work, let's ask the following question. Why can't you see an object that is far away? For example, why can't you read the writing on a dime when it is 150 feet away with your naked eyes? The answer to this question is simple: the object does not take up much space on your eye's screen (retina). If you want to think about it in digital camera terms, at 150 feet the writing on the dime does not cover enough pixels on your retinal sensor for you to read the writing.

If you had a "bigger eye," you could collect more light from the object and create a brighter image, and then you could magnify part of that image so it stretches out over more pixels on your retina. Two pieces in a telescope make this possible:

When you combine the objective lens or primary mirror with the eyepiece, you have a telescope. Again, the basic idea is to collect lots of light to form a bright image inside th­e telescope, and then use something like a magnifying glass to magnify (enlarge) that bright image so that it takes up a lot of space on your retina.

­A telescope has two general properties:

­A telescope's ability to collect light is directly related to the diameter of the lens or mirror -- the aperture -- that is used to gather light. Generally, the larger the aperture, the more light the telescope collects and brings to focus, and the brighter the final image.

The telescope's magnification, its ability to enlarge an image, depends on the combination of lenses used. The eyepiece performs the magnification. Since any magnification can be achieved by almost any telescope by using different eyepieces, aperture is a more important feature than magnification.

To understand how this actually works in a telescope, let's take a look at how a refractor telescope (the kind with lenses) magnifies an image of a distant object to make it appear closer.