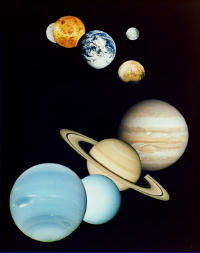 You will find views of the planets through a telescope quite satisfying, and they will keep you coming back for more. You can also observe planets from urban areas, where there may be moderate to substantial light pollution. With a small telescope (2-inch or 60-mm refractor, 4-inch or 100-mm reflector), you can see some details on the surfaces of planets, but a larger telescope (3- to 4-inch or 75- to 100-mm refractor, 6- to 10-inch or 15- to 25-cm reflector) will reveal better detail. Generally, refractors provide crisper images of planets, but lack the light gathering ability of reflectors. Regardless of which type of telescope you use, observing planets requires good seeing conditions -- steady, dry atmosphere with little or no clouds -- and you should cool your telescope to the outside temperature for about 30 minutes before observing. Cooling the telescope reduces air currents inside the tube that could produce fuzzy, blurring images.

You won't see any surface detail on Venus because it is covered with clouds. You can find something interesting to look at, though, because Venus has phases just like the moon, and you can easily see these phases with any telescope. Also, Venus is one of the brightest objects in the sky, and you can find it easily. Usually, Venus can be seen above the horizon before or after sunset; you can see it referred to in newspapers as "the morning star" or "the evening star."

Mars is a difficult but challenging target, because of its distance and small size. In my 4-inch (100-mm) rich-field, reflecting telescope, I can see a small red disc with no surface detail. In an 8- to 10-inch (20- to 25-cm) reflector, you could probably see the polar ice caps and some dark surface features ("canals") depending upon the seeing conditions. However, the face of Mars is constantly changing. Using filters may help to enhance the viewing somewhat.

This is about the size of the image of Jupiter in my telescope.
Photo courtesy of NASA

Jupiter is one of the prettiest sights in a small telescope. It is the largest planet in our solar system, and you can find it easily. In my 4-inch reflector, I can see Jupiter as a small, bright yellow disc, usually with two brown cloud bands on either side of its equator. In a larger telescope (8- to 10-inch / 20- to 25-cm reflector), you could see more cloud bands and the Great Red Spot.

You can also see the moons of Jupiter (Galilean satellites) -- Io, Europa, Callisto and Ganymede. The moons orbit Jupiter in changing positions each night, and they are interesting to watch over the course of many days. In a large telescope (8- to 10-inch or 20- to 25-cm reflector), you can even watch the shadow of a moon cross the disc of Jupiter!

This is about the size of the image of Saturn in my telescope.
Photo courtesy of NASA

Saturn is a favorite object for a telescope because of its rings. The rings of Saturn change their angle as seen from Earth as Saturn orbits the sun. So sometimes the rings are highly visible, while other times you cannot see them at all (viewed edge-on). Saturn is a bright object that you can easily find. In my telescope, Saturn appears as a small, bright yellow ball with the rings around it. I cannot see any surface detail, or the gap between the rings called the Cassini division. These features would probably be visible in a larger telescope.

Like Jupiter, Saturn has several moons -- Titan, Iapetus, Phoebe -- that change position. I have a difficult time seeing Saturn's moons in my telescope, although I may be able to see one of them on a good night. However, a larger telescope would probably reveal them much better.

Because of their great distance from Earth, these planets are difficult to locate, a challenge for any observer. I have never had any luck locating them with my telescope, and I probably would not have seen much more than a tiny disc if I did. In a larger telescope, it is likely that these planets would still only appear as small discs.

Like the outer planets, asteroids are difficult to see in small telescopes. Because they are so small, they appear in a telescope as points of light, like stars. Typically, to locate an asteroid, you find its position from a chart and then look at the field of stars. The asteroid will be a bright object that looks out of place when compared to the chart. If you look at the same field on successive nights, the asteroid will be the object that moves in the field. Finding these objects takes patience! Some advanced observers will measure the light intensities of asteroids over time, using photometers or CCD/digital cameras attached to the telescopes. You can use the changes in the light intensities to calculate the rate of the asteroid's rotation.