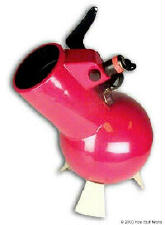 Isaac Newton developed the reflector about 1680, in response to the chromatic aberration (rainbow halo) problem that plagued refractors during his time. Instead of using a lens to gather light, Newton used a curved, metal mirror (primary mirror) to collect the light and reflect it to a focus. Mirrors do not have the chromatic aberration problems that lenses do. Newton placed the primary mirror in the back of the tube.

Because the mirror reflected light back into the tube, he had to use a small, flat mirror (secondary mirror) in the focal path of the primary mirror to deflect the image out through the side of the tube, to the eyepiece; otherwise, his head would get in the way of incoming light. Also, you might think that the secondary mirror would block some of the image, but because it is so small compared to the primary mirror, which is gathering a great deal of light, the smaller mirror will not block the image.

In 1722, John Hadley developed a design that used parabolic mirrors, and there were various improvements in mirror-making. The Newtonian reflector was a highly successful design, and remains one of the most popular telescope designs in use today.

Diagram of a Newtonian reflector showing the light path inside.

Rich-field (or wide-field) reflectors are a type of Newtonian reflector with short focal ratios and low magnification. The focal ratio, or f/number, is the focal length divided by the aperture, and relates to the brightness of the image. They offer wider fields of view than longer focal ratio telescopes, and provide bright, panoramic views of comets and deep-sky objects like nebulae, galaxies and star clusters.

A view inside the barrel -- note the primary mirror, and the image of the secondary mirror reflected back onto the primary.

Dobsonian telescopes are a type of Newtonian reflector with a simple tube and alt-azimuth mounting (see "Telescope Mounts"). They are inexpensive to build or buy because they are made of plastic, fiberglass or plywood. Dobsonians can have large apertures (6 to 17 inches, 15 to 43 centimeters). Because of their large apertures and low price, Dobsonians are well-suited to observing deep-sky objects.

The reflector is simple and inexpensive to make. Large aperture primary mirrors (greater than 10 inches or 25 centimeters) can be made easily, which means that reflectors have a relatively low cost per unit of aperture. Reflectors have large light gathering capacities, and can produce bright images of faint, deep-sky objects for visual observing as well as astrophotography. One disadvantage of reflectors is that you occasionally have to clean and align the mirrors. Also, slight errors in grinding the mirrors can distort the image. Here are some of the common problems:

In addition, all reflectors are subject to some light loss, for two reasons: First, the secondary mirror obstructs some of the light coming into the telescope; second, no reflective coating for a mirror returns 100 percent of the light striking it -- the best coatings return 90 percent of incoming light.