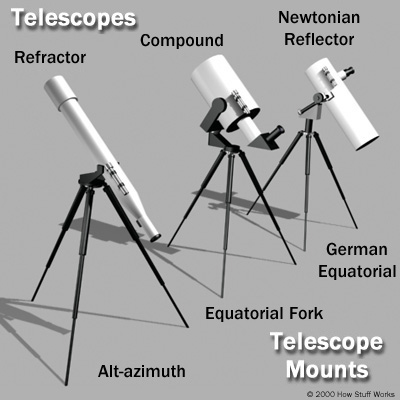 Diagram of telescope types and mounts.

Telescopes must be supported by some type of stand, or mount -- otherwise you would have to hold it all of the time. The telescope mount allows you to:

There are two basic types of telescope mounts:

The alt-azimuth mount has two axes of rotation, a horizontal axis and a vertical axis. To point the telescope at an object, you rotate it along the horizon (azimuth axis) to the object's horizontal position, and then tilt the telescope, along the altitude axis, to the object's vertical position. This type of mount is simple to use, and is most common in inexpensive telescopes. The alt-azimuth mount has two variations:

The movement of an alt-azimuth mount in relation to a star.

Although the alt-azimuth mount is simple and easy to use, it does not properly track the motion of the stars. In trying to follow the motion of a star, the mount produces a "zig-zag" motion, instead of a smooth arc across the sky. The zig-zag motion in the figure above is exaggerated and simplified for purposes of illustration; actually there would be more steps, and each step would be smaller. This makes this type of mount useless for taking photographs of the stars.

The movement of an equatorial mount in relation to a star.

When properly aligned with the Earth's poles, equatorial mounts can allow the telescope to follow the smooth, arc-like motion of a star across the sky. Also, they can be equipped with:

You need an equatorial mount for astrophotography.

alt-azimuth - type of telescope mount, similar to a camera tripod, that uses a vertical (altitude) and a horizontal (azimuth) axis to locate an object.

equatorial - type of telescope mount that uses two axes (right ascension, or polar, and declination) aligned with the poles to track the motion of an object across the sky.