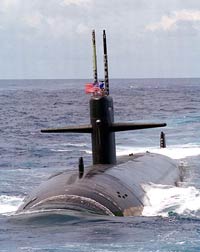 ­A submarine or a ship can float because the weight of water that it displaces is equal to the­ weight of the ship. This displacement of water creates an upward force called the buoyant force and acts opposite to gravity, which would pull the ship down. Unlike a ship, a submarine can control its buoyancy, thus allowing it to sink and surface at will.

Buoyancy in a submarine. Click on the Surface and Submerge

Buoyancy in a submarine. Click on the Surface and Submerge

buttons to watch buoyancy in action.