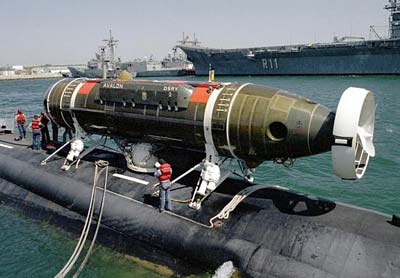 DSRV secured to the deck of a submarine
Photo courtesy U.S. Department of Defense

­­W­hen a submarine goes down because of a collision with something (such as another vessel, canyon wall or mine) or an onboard explosion, the crew will radio a distress call or launch a buoy that will transmit a distress call and the submarine's location. Depending upon the circumstances of the disaster, the nuclear reactors will shut down and the submarine may be on battery power alone.

If this is the case, then the crew of the submarine have four primary dangers facing them: ­

­Rescue attempts from the surface must occur quickly, usually within 48 hours of the accident. Attempts will typically involve trying to get some type of rescue vehicle down to remove the crew, or to attach some type of device to raise the submarine from the sea floor. Rescue vehicles include mini-submarines called Deep-Submergence Rescue Vehicles (DSRV) and diving bells.

The DSRV can travel independently to the downed submarine, latch onto the submarine over a hatch (escape trunk), create an airtight seal so that the hatch can be opened, and load up to 24 crew members. A diving bell is typically lowered from a support ship down to the submarine, where a similar operation occurs.

For more information, see the links below.

For an amazing, in-depth look at nuclear subs, see the book "Submarine: A Guided Tour Inside a Nuclear Warship" by Tom Clancy.